Jeff Hernandez: Painting is his passion, framing pays the bills 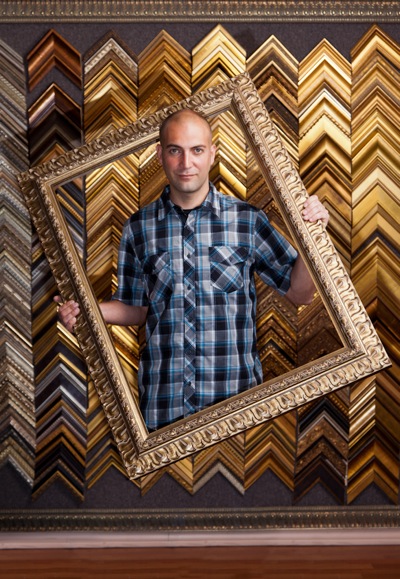 That the name of his business is Allegro Custom Framing and Custom Art fits Jeff Hernandez well. He’s both a framer and an artist, and you can see the fruits of both of those labors in the frame shop he took ownership of this past April.

He’s worked at Allegro, located in the Ladera Shopping Center, for six years, adding to what is now a decade as a framer. “It’s doing something with my hands,” he says.  “It’s not as creative as painting but it’s still building something and the satisfaction of producing a finished product.”

Jeff grew up on the Peninsula and lives in a house in Menlo Park next door to where his grandparents once lived and where his father grew up. He graduated from San Jose State with a Bachelor of Fine Arts in Illustration and Animation, a degree he says that comes in handy when advising customers about framing possibilities. 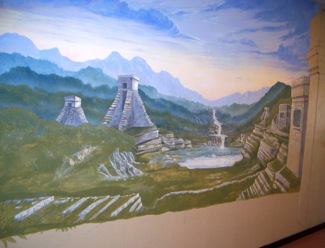 “I’m good with colors, matching colors, using colors that are complementary to a person’s art work,” he says. “Every piece of art has a personality to it — plus you also have to take into consideration what else is in a person’s home.”

He admits that framing is expensive. “Think of it like you would custom furniture,” he says.

Every month, Allegro showcases a local artist, and Jeff has his paintings on display at the shop as well. He also specializes in painting murals in people’s homes. Currently he’s finishing up a mural at Rosita’s Mexican restaurant on Woodside Road. “They left the concept up to me,” he says. “It’s a lost civilization that’s hidden in a jungle.

“I really like going on location and painting murals. It focuses me. Sometimes its hard to get started painting but once you go 15 minutes, it’s hard to stop!”

We have known Jeff and his family for many years and are very proud of his accomplishments and talents.