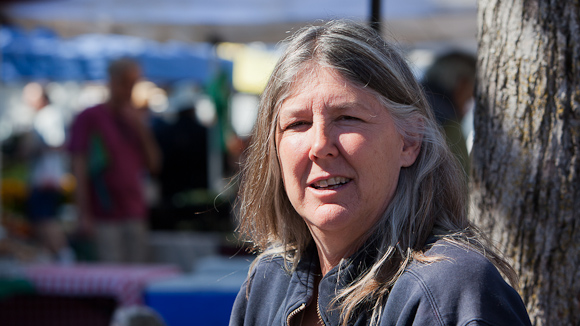 If you’re like us, as much as you enjoy the Menlo Park Farmers Market every Sunday, you never think much about how it all comes together so successfully week after week. The not-so-secret reason is market manager Lori Hennings, who has been managing the market since it began in 1992.

“I’d started a market in Santa Cruz after the 1989 earthquake,” said Lori this morning, sitting on a bench across from Chestnut Ave. vendors Karin Johnson (pastries) and Pietro Parravano (fish). “Some women from Menlo contacted me about starting a market in their town. I said ‘no’ at first but they were such a great group and it was such a good local effort, I agreed and have been here every since.”

While some markets in the area, are managed by outside enterprises, the Menlo market remains independent. Sponsored by the local Lions Club, the proceed go back into helping the community. At the market’s end each Sunday, leftover produce is distributed to those in need.

Lori said some of the vendors, like Pietro, Twin Girls Farm and Lucero’s, have had a consistent presence since the beginning. At its peak capacity there is space for 38 vendors. “That’s squishing them in,” Lori said.

In selecting vendors, Lori strives to give shoppers a choice and balance the offerings being sold. “If anything, I’d just want a few more spaces,” she said. “You wouldn’t want to double the market because that wouldn’t necessarily double the number of customers.

“We managed to stay at around 32 vendors all last winter, which was really good. Right now our farmers are doing really well — and it’s really all about the farmers.”

Thank to the farmers – and Lori – for bringing us such a great market experience every Sunday!