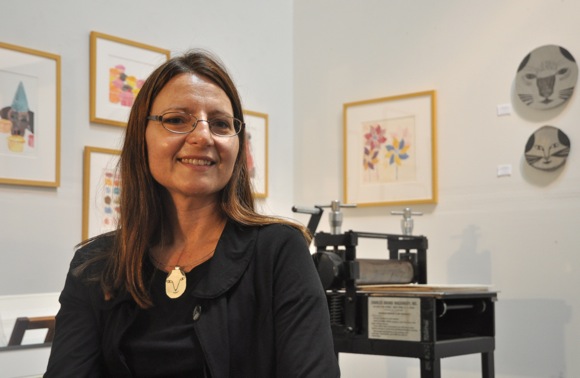 Cherise Thompson has been an artist almost her entire life. “I started doing oil paintings when I was 11,” she says, “and switched to watercolors in my teens. I’m so thankful to my family and friends who encouraged my creative spirit early on.”

While studying art at UC Santa Cruz, she discovered printmaking and found it the perfect blend of watercolor and oil painting. “Plus,” she says, “I could incorporate my sketching.”

Prints made by the Menlo Park artist are on display at two current shows. She’s one of the participants at a joint exhibit being held at Viewpoints Gallery and Gallery 9 titled Rhythm n’ Blue and has selected Cats Reflecting (shown below) for that show. Menlo-based artists Berni Jahnke, Diana Jaye, and Joyce Savre are also represented in the exhibit, which runs through August 30. The artists’ reception is on Friday, August 12 from 5:00 to 8:00 pm at both galleries, which are located in Los Altos.

Concurrently, Cherise has a solo show that includes intaglio prints and etching plates 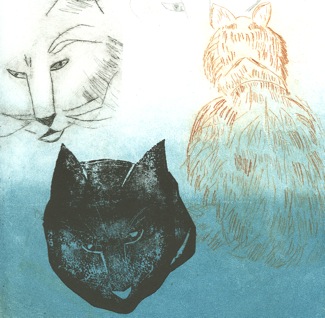 at The Wine Bar in Half Moon Bay. Her theme for this show is Riffs on Water. A reception is scheduled for Sunday, August 7 from 4:00 to 7:00 pm.

Cherise is not only passionate about her art but the printmaking community as well. “We share presses, so we are supportive of each other,” she says.

When not engaged in her craft, Cherise is teaching others the art of printmaking. She offers workshops for 8-to-14 year-old kids at the Pacific Art League and also teaches once a week during the school year at the Boys and Girls Club in Menlo Park.

“Kids are amazing and connect with printmaking so enthusiastically,” she says. “It’s fun to see the ah-ha moments when they pull their first print!”