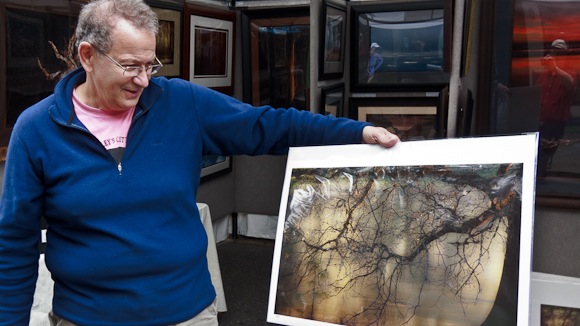 Somewhere along the path of becoming a biologist, Fred Mertz instead became a photojournalist. Five or so years ago, he took another turn, turning his attention to fine art photography.

“I would have messed it up if I set out to be a photographer,” he says. “It’s much better that I fell into it. That’s somewhat the case with my switch from editorial to fine arts photographer. With publication budgets shrinking, I found I was getting less work. So I said to myself, ‘That’s it. I’m going to venture out one day a week and take pictures.’ I quickly found I was having a blast doing it.” (Bristlecone Stars by Fred is shown below.) 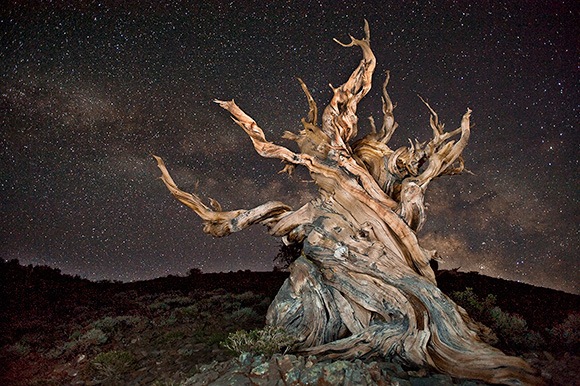 Fred credits the multitude of scenic vistas all within a four-hour drive from his Menlo Park home as fuel for his passion. But one of his earliest projects was closer to home, photographing wife Cindy’s garden. “That series helped move me in the fine arts direction,” he says. “I did a lot of gardening when I lived in Bolinas but never really looked at or photographed the plants. But I started noticing the roses and droplets of water in Cindy’s garden. They were so amazingly sensual. That led to my series of plant portraits.” 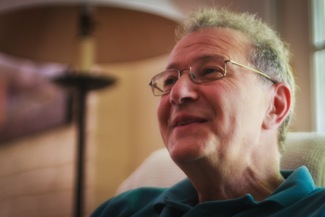 Fred shoots with Nikon cameras, now exclusively digitally. “The switch from film to digital wasn’t easy for me. I was kicking and screaming the whole way, but I’ve come to love digital. It allows for so much more playfulness in the field. You can really massage a scene.”

From his earliest photographic efforts, Fred was good at sizing up the situation and taking the shot, focusing more on shapes and patterns than color. When he transitioned to fine arts photography, he was initially attracted to big views.

“But today I’m more interested in the detail,” he says. “And shooting in the moment, because light is so transitory. A couple of weeks ago I was in Yosemite and saw this tree with the light falling on it just so with the Merced River in the background. I knew the shot wouldn’t last. I didn’t have time to put the camera on tripod. Ten seconds later that special light was gone.”

Fred says “My art continues to evolve. The body of work I created two years ago is very different from what I’m showing today.”

You can meet Fred and see his work at two local shows in the coming weeks – the Palo Alto Festival of the Arts on Aug. 27 and 28 and the Kings Mountain Art Fair on Labor Day weekend.

Dynamite work by Mr. Mertz. Love how he brings a dead tree to life.