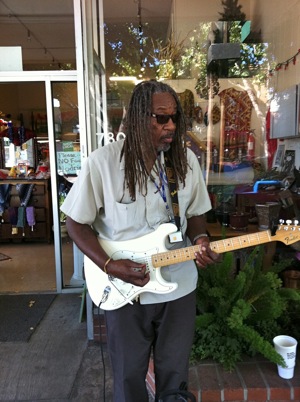 On some days you can hear the sounds of blues on Santa Cruz Ave., courtesy of “skeewhip whithers,” all lower case as his business card reads. We spotted him playing his electric guitar in front of Menlo Gift Bazaar and stopped to chat. Claude Withers, now 60, told us he’s been playing the guitar since he was 12. His guitar is Claude’s “fun” second job. He also plays some days in front of Pizza My Heart in Palo Alto.

Leslie and Allan Aldrich, the Bazaar owners, said he politely asked them a couple months ago if it would be all right with them if  he played occasionally for tips in front of their shop.  Menlo Park Code Enforcement has approved his battery-operated amplifier.

He enjoys letting passing children play his guitar. Occasionally he gets a paying gig, most recently at The Dutch Goose. He is also working on a CD with another musician. If you’d like to talk to Claude about playing at your place (commercial establishment or private residence), call skeewhips music at (650) 776-1425 or email claudewithers@yahoo.com.