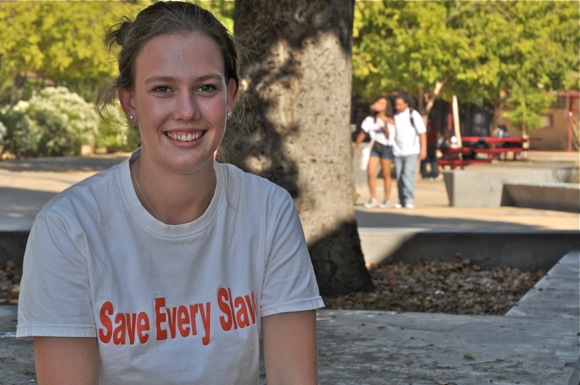 Having first been introduced to Menlo-Atherton High School’s Save Every Slave club when we spotted the group selling fair-trade chocolate at the Farmers Market last December, it seemed timely to check in with the club’s co-founder, Sydney Young, in advance of the Freedom Walk set for mid-October.

While the club’s goal is to raise awareness about human trafficking in general, it focuses, in particular, on labor trafficking and fair trade. For those surprised that high school students can sink their teeth into such a serious topic, in Sydney’s view, that’s the point: “We believe that students can be in the forefront of this modern abolitionist movement.”

Sydney says that she was first introduced to the issue of human trafficking when she was an eighth grader at Hillview School. “I read the book Sold by Patricia McCormick and learned about modern day slavery. I continued to research what was going on around the world. Then when I was a sophomore, I called up my best friend [Elizabeth Sherwin] and suggested we start a club at M-A.”

Since its founding, the club has shown a number of documentaries on the subject and sent letters to Hershey requesting that they “clean up their supply chain,” as Sydney explains, adding: “About 70 percent of the chocolate in the world is picked by slaves.” Sydney and Elizabeth have also spoken at the Freedom Summit about how to mobilize high school students.

The club-sponsored Freedom Walk will take place on Saturday, Oct. 15 from 11:00 am to 2:00 pm at Burgess Park. They’re partnering with the Bay Area Anti-Trafficking Coalition, and the money raised will go to that organization. There will be information booths staffed by representatives from Freedom House, Not for Sale Campaign, Canvas Justice, and International Justice Mission, as well as fair-trade goods for sale from Trade as One.

Teams of four walkers will walk a total of 27 laps, representing the 27 million slaves in the world today. Individuals can walk 14 laps in honor of the child slaves around the world.

“Our goals is 125 attendees and we’re hoping to have a significant student presence,” says Sydney. “But we’re equally excited about getting the wider community involved. It’s a great opportunity to show off some of the Bay Area groups working so hard to reduce human trafficking.”

Registration for the walk is available online.

Way to go Sydney and “Save Ever Slave!” The Lord bless your efforts!