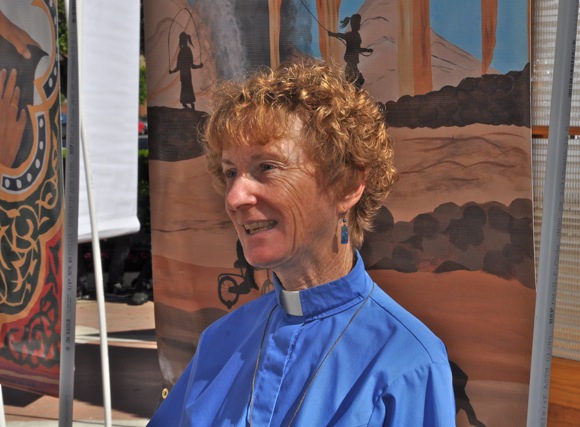 We stopped in to visit with Menlo Park resident the Rev. Dr. Diana Gibson today at a peace vigil to mark the 10th anniversary of the war in Afganistan, which was hosted locally by the organization she co-founded, Multifaith Voices for Peace and Justice (MVPJ) and featured artistic banners by artists and students from the perspective of Afghan civilians

Her participation in the event is rooted in her faith. Diana was ordained a 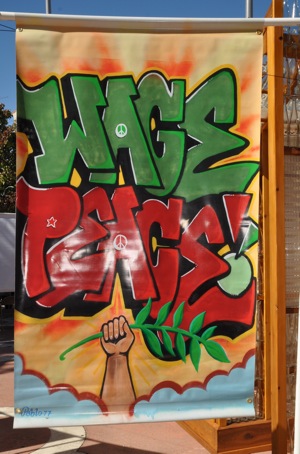 Presbyterian minister 30 years ago and spent 16 years as pastor of First Presbyterian Church Palo Alto and two years as co-Executive Director of the Council of Churches of Santa Clara County. After receiving her doctorate she turned her attention to teaching religious studies at Santa Clara University.

“I’ve not been inclined to get involved in politics,” she said. “But I couldn’t be a faithful follower of Jesus without being actively engaged with peace and justice issues.”

She co-founded MVPJ in 2001. The organization represents 36 diverse faith communities and traditions, joined together to put convictions into action by saying “no” to war and “yes” to peace and justice. “By acting, you suddenly don’t feel as hopeless, you’re in community with other people,” she said.

“We believe it’s important to be the sand and not the grease in the war machine,” she said. “We’re not going to stop the war in Afghanistan by this event today, but every little grain of sand will drag it down.”

Also involved in Christian Peace Witness, Diana was one of the 222 people arrested in 2007 demonstrating for peace in front of the White House. “That’s an example of each of us being that grain of sand. We’re called to action as part of the human family that cares.”