The Members crank it up at annual Halloween gig 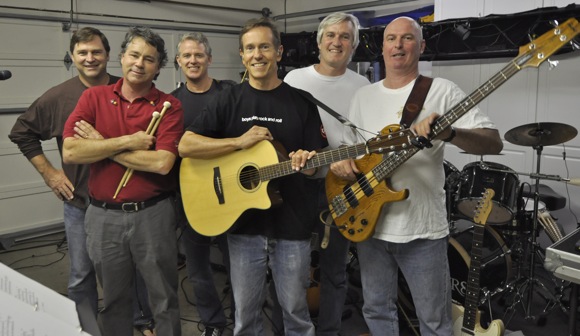 Some bands get hatched in garages and grow to play gigs in clubs. A select get famous and play arenas.

But Menlo Park Dad band, The Members, was hatched along the sidelines of a youth soccer game. And except for a half dozen public appearances each year, they hang out as a garage band, practicing weekly at Roger Inman’s house.

Fans of their music can catch one of their rare live appearances on Halloween, when they’ll be jamming at a home on the corner of Oak Dell and Lemon in west Menlo Park.  “We started doing the Halloween gig because it fell one year on our practice night,” says Roger (red shirt in top photo, who’s band mates include, left to right Scott Wachhorst, Rob Scherba, Jeff Bird, Allen Weiner and Rich Johnson. “Last year the Giants were playing in the World Series, so put out a big screen TV so people could watch the game, too”

They stress that they are a strictly non-profit band, playing together for the fun of it and to raise money for local schools and other organizations. They say they’ve had few creative differences and try to give each member his turn at the mike.

“There are days when I’m having a bad day at work and I find myself wishing it was band night,” says Allen. “A lot of the stresses of life go away when we play together.”

Adds Roger: “We’re old, we’re loud, and we can’t hear anything. But you can’t beat the camaraderie.”