Menlo heritage oak gets “MRI” scan to root out any problems 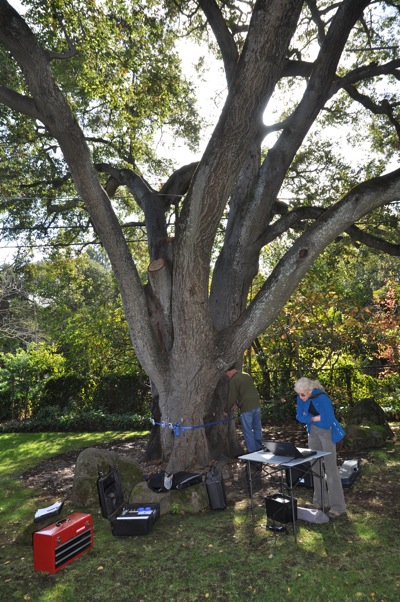 Menlo Park is known for its old and beautiful oak trees. Unfortunately, the “old” part can cause problems. One of Menlo’s largest heritage trees,  a coast live oak located on Bay Laurel Drive, recently alarmed homeowner Sue Swezey by dropping three huge limbs in her back yard — one of them weighing about 2000 pounds.  As luck would have it, a gutter succumbed as well, allowing insurance to cover at least part of the considerable cost of the damage.

“I wasn’t sure what to do next but Davey Tree came to the rescue, with a recommendation to consult an independent arborist to determine if the tree was healthy enough to survive,” said Sue. “So on a crisp fall day, Tim and Deborah Ellis appeared with a truckload of equipment, preparing to take a kind of ‘MRI’ on the tree.” 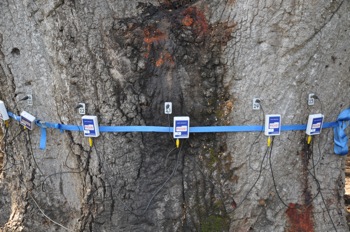 “Tomography is just one tool and should never be used alone to make a decision about a tree,” said Deborah. “We also look at the tree itself and its surrounding environment.

“People should not be unduly alarmed about the old trees on their property. Advanced tree structural diagnostics should really only be performed if you have reason to believe the tree poses a risk, if there’s a reason to suspect a problem. Too often this seems like a magic way of looking into a tree that can absolutely tell someone if it’s ‘safe’ or not, but it’s not as simple as that.”

Sue’s backyard oak has multiple trunks, meaning it stump-sprouted in the past. Its age has been previously estimated at 250 to 350 years, so the sprouting would have had to begin in the late 1700s for it to reach its present size.

“The tree is a  beautiful presence,” said Sue. “It’s a treasured part of Menlo Park’s past and presence, and with luck and the aid of modern technology, of its future as well.”

So far, the tree’s prognosis is good; it will remain standing.