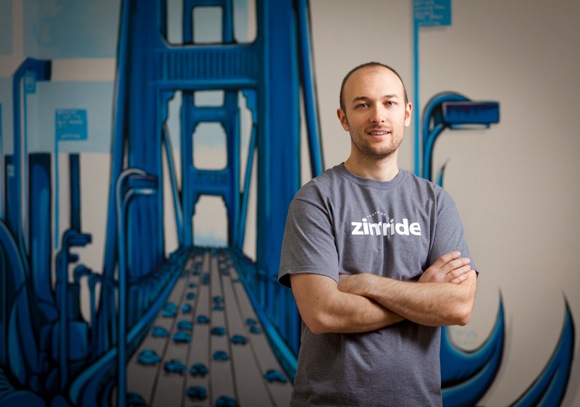 Today (1/9) may be the official launch of Zimride Menlo Park but the ride sharing company has had a toe in town for longer. Co-founder and CEO Logan Green lives in Menlo — he and his wife like hanging out on the swing set at Nealon Park. And Menlo Park-based Facebook helped the company get its start three years ago with a $250,000 fbFund grant.

“We’ve had a long and great history with Facebook,” said Logan, who founded the company along with John Zimmer, who serves as COO. “We  started Zimride because we say the opportunity Facebook was creating. It’s about trust and identity. Linking riders and drivers via Facebook allows that to happen.”

In a sense, the city of Menlo Park is riding the coattails of its newest big corporate resident, Facebook.  Forty five percent of the employees at the social networking company have already signed up to use Zimride, which Logan describes as “market place of public transportation.” Drivers sell empty car seats to passengers who are traveling the same route. The city version, Zimride Menlo Park, is available to anyone who lives or works in Menlo Park.

Zimride’s early traction has been achieved through the creation of university and corporate networks. Zimride Menlo Park will join Atherton’s Menlo School, which is already participating in the ride share program. People who sign up for Zimride Menlo Park become eligible to win a free iPad.

“I believe our focus on a specific municipalities, companies or universities has been key to our success,” said Logan. “That focus differentiates us from other car pooler networks.”