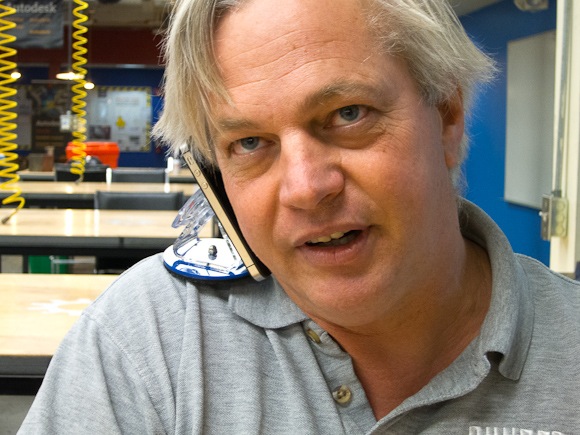 Willie, Scooter and Jack. Those are the names of three iPhone holders available from Menlo Park-based start up Insanely Great Products. Behind each name is a person: co-founder and President Jeff Osborn’s girl friend, her horse’s name, and the name of their PR guy.

“Jack, our PR guy, got the honor because he looked at squared-shaped Scooter and suggested it would be easier to customize if it was rectangular,” said co-founder Richard Ford, who’s the VP of Marketing (pictured below right). 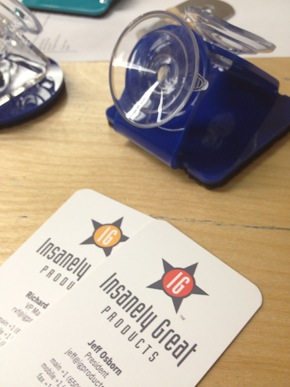 During a visit at their shared space at Menlo Park’s TechShop, the co-founders said they’re distinct in a number of ways. For one, their products are created from materials made in America. For two, they’re manufactured not offshore but right here in Menlo Park.

“One of the fun parts of starting this business was getting to know the industrial side of Silicon Valley,” said Richard.

The two co-founders have known each other for two decades but got together to start Insanely Great just three months ago. “When we reconnected, I was trying to create iPhone cases out of renewable wood,” Jeff said. “I’m always making stuff. Have been since I was kid.”

“The inspiration for the Willie — our first product, named after my girlfriend — was watching her pick up and check her iPhone on the few evenings we actually managed to have dinner together. Attaching the phone to a little suction cup on a stand means she only has to glance at it, not pick it up.” 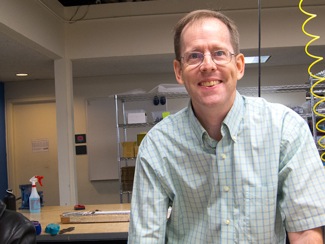 Given that it’s seemingly impossible for people today to sit through a meal without checking their smartphone device, the Willie is two-sided so that two people can actually both see their iPhones. Jeff also demonstrated how it could also be used to facilitate talking on the phone like you used to do, with the phone propped between shoulder and face (top photo).

Currently the products are sold individually through the company website with customization offered for corporate orders. “If someone wanted a 100 Jacks with their company name and logo for a trade show tomorrow, we could make it happen because everything is done here,” said Jeff.

The company is gearing up for MacWorld the last week in January, a defacto public launch. With current staffing, they can turn out 1,000 products a week.

“We make a good pair,” said Jeff. “I tend to fire first and then look for the gun. Richard can explain what the elevation of the shot was and how much the bullet costs.”

I like to support local industry, but I have to say that I don’t know where my number one iphone accessory was made, nor would I abandon it if its provenance were elsewhere than the United States. I guess I’m just partial to what I know though. My phone would probably be a pile of glass shards without its Skech hard rubber for iphone case…