by Diane Rezendes Khirallah on January 25, 2012 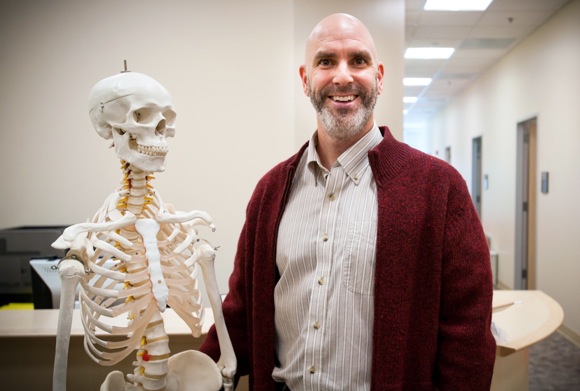 Matt DeAngelis didn’t start out to become a nurse practitioner. In fact, medicine isn’t even his second career. It’s his third — after zoology researcher and sea captain. While many people in medicine follow a straight path from education to practice, DeAngelis took a more circuitous route to arrive at nursing and SLAC in Menlo Park.

He joined the SLAC’s Occupational Health Center in November, after a stint as the charge nurse in the Stanford emergency room. Like a registered nurse, he focuses on patient care and education. Unlike an RN, he can work in independent practice, diagnose, refer and prescribe.

DeAngelis says he is passionate about preventive care, and ways to bring more of that to his new role. Some of the clinic’s preventive efforts are typical of workplace clinics, such as free flu shots for employees. Others are SLAC-specific: For example, relatively few workplaces need beryllium surveillance. But at SLAC it’s essential for employees who may be exposed.

Asked about his top three medical recommendations for SLACers, he doesn’t hesitate, and neither does he seem to mind if his answer sounds like medicine’s take on the old joke about real estate: “Exercise, exercise, exercise. Exercise reduces blood pressure, controls blood sugar and supports overall cardiovascular health,” he said. “It is the number one intervention that people have control over.”

A trail runner, he climbed Kilimanjaro over SLAC’s holiday break

An avid trail runner, DeAngelis definitely follows his own advice. Sometimes he moves his workout indoors to a rowing machine or elliptical trainer at the Stanford gym. He complements his cardio work with plyometrics — short-duration, high-intensity exercises designed to increase speed, agility and power — all of which helped prepare him for climbing Kilimanjaro.

On Christmas day, DeAngelis was on day two of the ascent, and by Dec. 30, he was back down. He said it was spectacular to eat, sleep and hike on Kilimanjaro over the holiday. “The relative quiet and peace of being on the mountain, out of phone, email, and commercial contact was wonderful,” he said.

Years as ferry captain and then to medicine, a family pursuit for three generations

Growing up close to the ocean in New England, it was a natural choice to work his way through college as a deck hand on the Cross-Sound Ferry, which makes the daily crossing between the Connecticut coast and the northern tip of Long Island, a distance of 17.5 nautical miles.

Once he earned his biology degree, DeAngelis may have thought he was done with the ferry. Graduate studies and a teaching assistantship took him to the University of Tennessee, where he earned a master’s degree in zoology. From there, he did research at the University of Chicago, where he came to realize his career interests were broader than those he saw available to him.

He craves openness and flexibility in his work, but “I would have spent my career chasing down grants,” he said, or going on to a Ph.D. and, likely, professorship. “I like open doors.”

Taking the time to discern what work would make him happy, he returned to Connecticut and a full-time job at the ferry, working his way up to captain with his 100-ton license.  Although his ship wasn’t the largest in the fleet, it was the busiest.

Meanwhile, he looked into nursing, which despite its association with hospital work, “is very open-ended with lots of options,” DeAngelis said. He quickly ticks off a few — school nurse, occupational health, public health, pharmaceutical sales, teaching.

While it may seem a far cry from ship’s captain, nursing is a coming home of sorts for DeAngelis. He represents his family’s third generation in medicine: His grandfather was a physician, his grandmother a nurse. His father is an occupational safety specialist and his mother a nurse, though both are semi-retired.

So, just as he had for his first bachelor’s degree, he balanced studies with work on the ferry once again — only this time as captain. After earning his RN license, he left the ferry for good, moving to the Bay Area and the University of California, San Francisco, for a master’s degree that would qualify him as a nurse practitioner, eventually bringing him to SLAC.