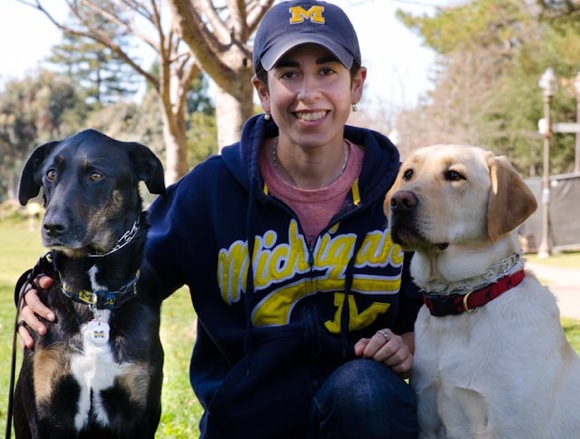 Well before she graduated from Menlo-Atherton High School and went off to attend the University of Michigan, Colt Rosensweig had a passion for sports and a dream of becoming a sports writer. Topping her sports list was baseball. In fact, she decided to attend Michigan because it was close to her beloved Detroit Tigers.

As often happens in life, there are twists and turns. As a job requirement to be a baseball beat writer for the Michigan Daily, she had to also cover two “lesser” sports. One of those sports was gymnastics, and Colt was instantly hooked.

“The second year I was covering the gymnastics team, I decided I really wanted to immerse myself in all the team’s activities, so I started going to practice,” she said during a conversation at Burgess Park with two dogs at her side (more about that to come!). “About once a week, the retired gymnastics coach Newt Loken would come and watch practice, too.”

“We’d sit together and he was such a fun guy. You couldn’t be around Newt and not be smiling. He knew everybody and regaled in the art of story telling. You could really see why he had touched so many lives. His athletes viewed him as a second father, not a a drill sergeant coach.”

The result of those conversations and many more over the ensuing years are captured in the book Newt: The Father of Michigan Men’s Gymnastics, just published by Huron River Press. Colt will be signing books at Kepler’s on Saturday, Feb. 25 from 3:00 to 5:00 pm and promises a special surprise around 4:00 pm. (Hint: the Michigan men’s gymnastic team is in town for a meet against Stanford.)

Given that Colt is now a published author and the book is about sports, one might presume that she’s on to more sports writing. Wrong. Colt is actively pursuing a career as a dog walker, sitter, and trainer, plying her trade mainly on the streets of Menlo Park.

“I really love it,” she said, with dogs Juno and Charlie at her side. “I’ve been training with Freddie Jackson, who is a well-regarded local trainer. Of course, people are telling me to write a dog book. But, I think I need to have a lot more adventures. That was what was great about Newt, he had so many great stories!”

Kepler’s has Colt’s book in stock; for dog-related duties, she can be reached at  MichiganColt@gmail.com