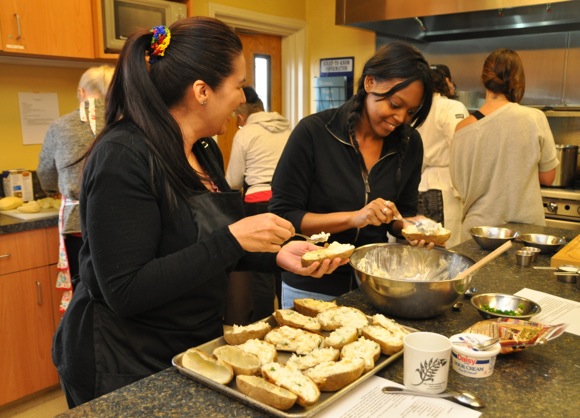 The requirements for a good nanny in these parts aren’t just the ability to care well for children. “Our families constantly ask for nannies who can cook a simple, healthy family meal,” said Daryl Camarillo, president and owner of Menlo Park-based Stanford Park Nannies. “Whether both parents work outside the home or not, families in this area need another member of the parenting team to help run the home.”

When Daryl would ask nannies about their willingness to cook on the job, she found that they had the desire, but often lacked the skills and/or the confidence to function well in the kitchen. Enter Chef Suzy, who had been a client of Daryl’s when Suzy’s twin boys were newborns. “I remembered her to be a very practical, approachable person with a great sense of humor, so she was a perfect choice to teach a cooking class for Stanford Park nannies,” said Daryl.

About a dozen nannies took part in the class “You CAN cook!” this morning, taught by Chef Suzy in the kitchen of the Masonic Lodge in Menlo Park. The goal was to teach the nannies how to create simple, healthy family meals, along with techniques to encourage kids to help in the kitchen in safe ways. Today’s lesson included cooking a couple kinds of soup, three starches (including twice baked potatoes being prepared in top photo), two vegetables, pan-roasted chicken, and sauteed shrimp on string pasta. 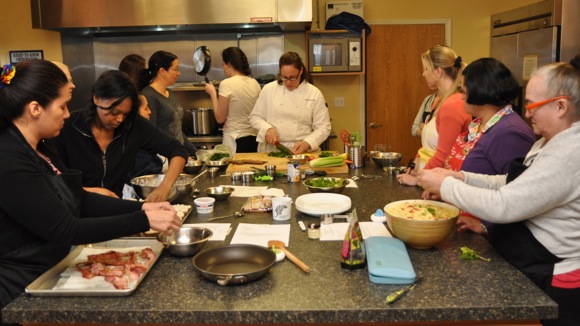 Chef Suzy also provided a list of pantry items to have on hand when the nannies arrive home with hungry kids at the end of a long day and need to get dinner on the table fast.

From Daryl’s perspective, the “experimental” class was a success: “While I knew a cooking class addressed a need, I did not expect such a response for our first offering. The participants included nannies who have registered themselves and some who are sponsored by their employers. And, the class was filled to capacity!’

We presume this isn’t the last collaboration between Daryl and Chef Suzy — both residents of Menlo — especially if word gets out on the nanny circuit. “This is just so much fun!” said the nanny pair in charge of the twice-baked potatoes. And yes, they all got to eat the fruits of their labor for lunch.

Chef Suzy is a RIOT and had lots of good tips for beginner and experienced cooks in the kitchen! Can’t wait for the next round!

Does chef Suzy give classes? I would love to take one!