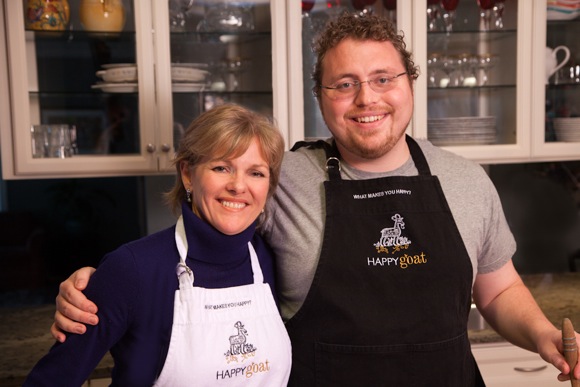 Michael Winnike always has liked a good debate. When we met him in the kitchen of the Menlo Park home where he grew up, the discussion at hand was which of the six whiskies he was mixing with the caramel base he uses to make Happy Goat caramels and sauces was the “best.”

Michael’s debate gene — both his parents practiced law — once led him to think about becoming an attorney. But, that at age 28, he’s running a caramel and confection business isn’t all that surprising to him.

“My family are all foodies and we’re in a great food area,” he says. “Once I figured out I wanted to pursue a career in food, I figured I could teach myself how to make candy by reading cookbooks and scientific articles, then by going through trial and error with my own recipes.

“I started making caramel at home and then rented time in a commercial kitchen that was dedicated to candy making. That gave me exposure to what other people were creating.” 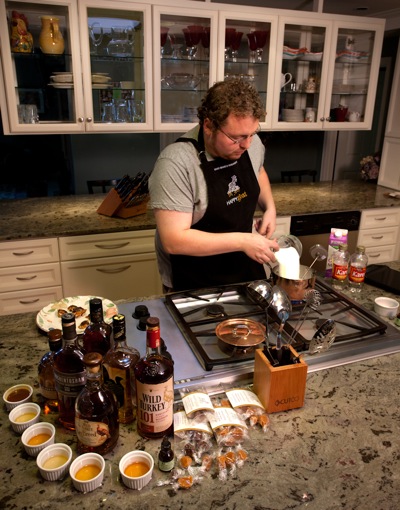 He made the decision to base his products on goat milk because he believes it makes his caramel candies and sauces more complex and less sweet. “I was reacting against the cloying sweetness of some candy,” he says.

Michael worked to perfect his recipe in 2008, then on packaging and regulations related to selling food products in 2009, launching Happy Goat late that year. In 2010, he brought on another employee, his mother Sharon, who had helped out at his booth in the Fancy Food show.

“I was wondering what I was going to do when my youngest (of four) sons went off to college,” says Sharon. “Having practiced law, I never thought it would be working at a candy company run by my son. I was the boss, now he’s the boss.”

The Winnikes expanded into caramel sauces in 2011. Their Happy Goat Vanilla Bean Caramel Sauce was named one of the top 10 outstanding new products of the year by the National Association of Specialty Food Retailers, out of 464 entrants. Their newest Scotch Caramel Sauce, which combines Aberlour 12-year-old single male scotch with vanilla bean, was included in Food & Wine Magazine’s  “ultimate gift guide.”

“The sauces are an invitation to our customers to get creative,” says Michael. “Plus, it gives us the opportunity to collaborate with other food companies.”

As for the first round of taste tasting for the new whisky-flavored sauces, there was no outright winner. Although, there was a clear leader that will be revealed when it hits the shelves.