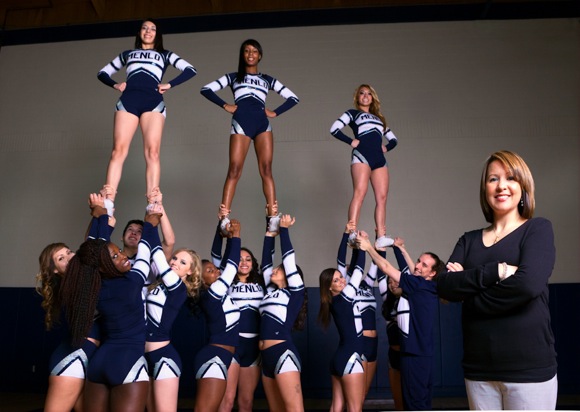 Update from Kezia after the team’s first national competition: “The team’s performance was just amazing. They didn’t drop any stunts and did the pyramid. It is phenomenal how far the team has advanced since the start of the program.”

Menlo College’s Head Competitive Cheer Coach Kezia Molinsky wants to be clear about what her team does. It isn’t about pumping up the crowd from the sidelines — although this year, the team does a bit of that, too.

“Pom-pom/song girls are performers at sporting events that engage the crowd,” she explains. “Side line cheering also gets the crowd involved. Competitive cheer is about competing against other schools, but because the Menlo College program is new, this year’s team does both. Next year, there will be two teams — side line and competitive.”

Kezia’s team of 14 athletes is working on a two and a half minute routine that includes performing stunts and executing a pyramid as well as incorporating tumbling and dance. They’ll take part in the USA Collegiate Cheer Nationals at the Anaheim Convention Center on March 18-19. 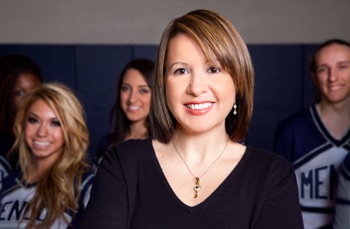 “I love going to work every day and having each practice be different,” Kezia says, who lives on the Menlo College campus. “All but two on the team are new to the sport, so they’re learning and accomplishing things they’ve never done before. I’m just blown away by their progress. I’m thinking we’re going to look really, really good when we compete.”

Currently, the NCAA is considering giving competitive cheer emerging sports status to further legitimize the sport. If that happens, it will also help colleges and universities comply with Title IX, the Federal law that bans gender discrimination at educational institutions.

“By making competitive cheer a varsity sport, the judging procedures will become more standardized, which is good,” adds Kezia, who cheered in both high school and college.

As a full time coach, Kezia says she spends most of her time not coaching but rather recruiting athletes. She is also involved in the two cheer leading camps Menlo College holds each summer. One is an invitational camp for athletes who go to high school finals.

“That’s great — the athletes come to me,” says Kezia, adding with a smile, “That should make my recruiting easier!”

Editor’s note: All photos are by Scott R. Kline. It was too hard to pick one. The photographer’s favorite is the image below. Emailed Scott: “I asked them to all look badass, like they were competing…great group of kids!” 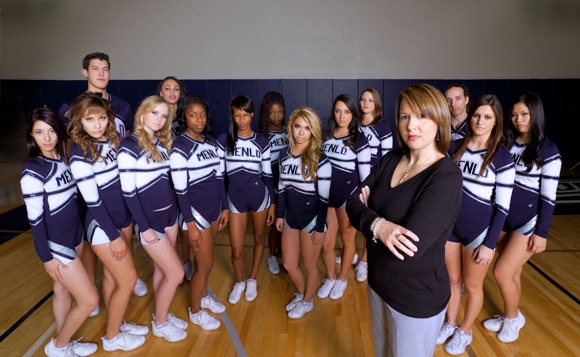