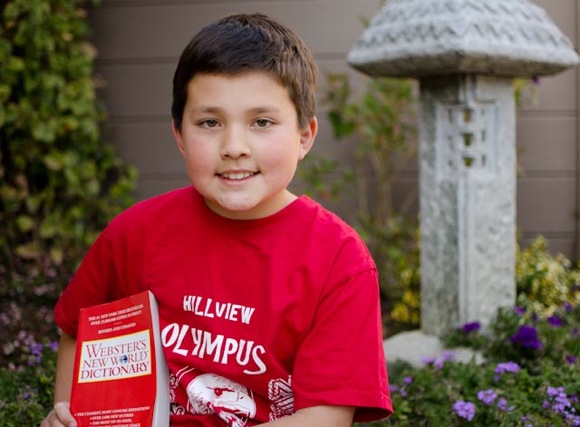 Update: Joey made it to the 5th round of the regional spelling bee, one of only 18 out of 50 young spellers still competing during that round. What was his hiccup? Here’s the clue: spell a word that starts with “h” that means “clumsy, useless person.” The word was “hobbledehoy”.

While some people will use St. Patrick’s Day to get a bit silly, Hillview School sixth grader Joey Lohmann plans to be calm and focused, particularly when it comes to word origins. That’s important when you’re a spelling bee contestant.

Joey is one of 50 sixth through eighth graders who survived the written portion of the Bay Area Regional Round of the Scripps National Spelling Bee, which took place in mid-February at the Lawrence Hall of Science in Berkeley. It was there that over 200 young spellers gathered to earn a spot at the final regional round to be held on Saturday, March 17 at Pier 39 in San Francisco. The winner advances to the national spelling bee in Washington, DC.

Recalls Joey: “The pronouncer would say the word, and we’d have to write it down. We could ask questions, and that’s what took a lot of time.”

“I know I got at least one wrong out of the 50,” says Joey in a matter of fact manner, without a hint of bravado. “I misspelled ‘schottische’. I looked it up after the test because I wasn’t familiar with the word.”

(We’re guessing most of you are also new to the word. It’s a partnered country dance that may have originated in Bohemia.)

Joey, who’s lived in Menlo Park since birth, studies for the regional competition every day by reviewing the booklet given to participants as well as words with his Dad, Scott Lohmann. He’s also watched the movie Akeela and the Bee as well as videos of past spelling bee competitions.

He says he’s always been a reader — favorites are fantasy novels like Harry Potter and The Hunger Games trilogy — and remembers winning a school-based competition when he was a third grader at Oak Knoll, spelling Delaware correctly.

When we visited with Joey and his mom, Lisa Kim Lohmann, the sixth grader was looking forward to the Menlo Atherton Little League opening day just as much as his upcoming spelling bee competition. All that to points to the fact that he’s a regular kid, who just happens to have a penchant for words.

“I really like the exhilaration of being on stage,” he admits. “And, when you get a word right, there is a huge sense of relief.”