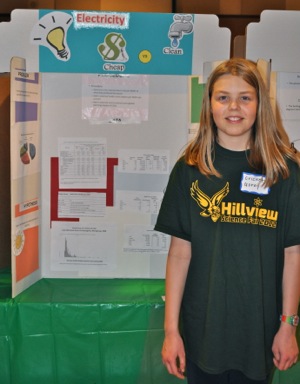 Hillview School sixth and seventh graders, including Cricket Gorey pictured, participated in the school’s first ever (at least in the “modern era”) Science Fair last week. Wrote principal Mike Melton: “Students eagerly sat by their presentation boards to explain to the hundreds of visitors the outcomes of their experiment hypotheses and conclusions. They did an outstanding job describing their approach to the scientific method, demonstrating sophisticated thinking as they compared their actual results with their expected outcomes. The Science Fair was a resounding success, and we thank our science teachers Mr. Espinoza and Mr. Ritter and their parent helpers — especially Kate O’Connell and Radhika Anne — for organizing it and evaluating the students’ work.”