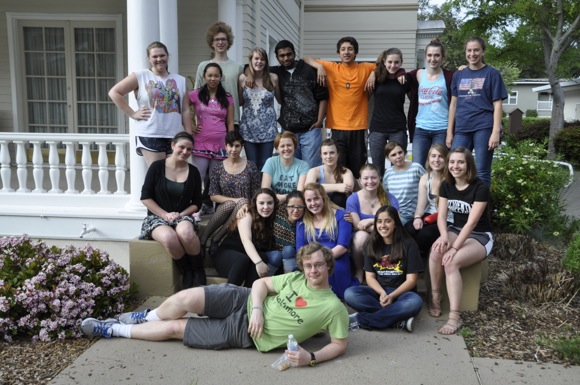 When Nina Lozinski talks about Grab Bag Theater, the emphasis is on “community,” the word she uses to describe the many people who are involved in what just may be the only totally student-run theater company in the nation.

“We haven’t found another company like us, and we’ve gotten invitations to open duplicate companies in other cities,” she says.

The Grab Bag community includes actors, technicians, people who plan and take part in open Mic nights, and the parents who support the group. “It’s really about anyone who participates in Grab Bag activities and that includes our audiences,” said Nina.

About 60% of the students who are involved with Grab Bag are from Menlo-Atherton High School, with another 30% from Summit and the remaining 10% from other local high schools. 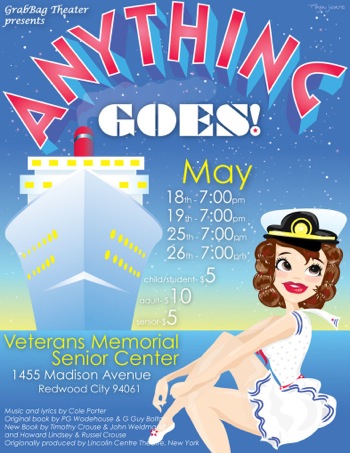 When it came to picking their spring musical production, Anything Goes, Nina says the whole Grab Bag community was involved. “The first thing we did was make a list of all the musicals we’d ever heard of,” Nina said. “To narrow it down, we looked into how much it would cost to stage the various productions. Once the research was done, we had three finalists. We opened the voting to the whole Grab Bag community, and the choice was Anything Goes.

The musical’s cast numbers around 25. “I love the moments at rehearsal when the whole cast is involved in one of the musical numbers,” Nina says. “It just hits me — we’re a bunch of students making this all happen. Call it my ‘proud parent’ moment.”

Adds stage manager Margaret Ringler: “Given all the musical numbers, we’re sometimes  rehearsing three different scenes all at once. But it still works and that’s amazing.”

Anything Goes will be presented May 18, 19, 25 and 26 at Veterans Memorial Senior Center in Redwood City Tickets ($10) are available online in advance or at the door.

These kids are absolutely amazing. They have the start up spirit, usually only found in Silicon Valley companies.