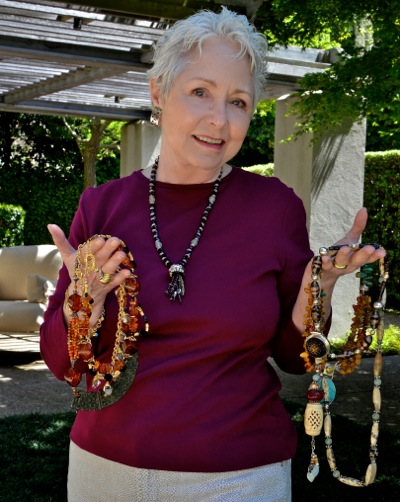 When jewelry maker Cathy Wentz walks around, she looks down. “I get inspiration from everything,” she says, “but I especially enjoy gathering found objects I spot on the ground — seed pods, twigs, that sort of thing.”

The Atherton resident, who will be exhibiting her jewelry on May 19 and 20 as part of the Silicon Valley Open Studios, admits to having a lifelong artistic bent. She painted acrylics for many years and also spent time as an interior designer at Menlo Park’s Flegel’s Fine Furniture. “I’m always into something,” she says.

That something became jewelry seven years ago when she took a metal smithing class, not because she wanted to make jewelry but was just interested in the process. “The class was just for fun, but then someone introduced me to silver metal clay and I got hooked,” she recalls. “I mold the clay and stamp it with all sorts of things.”

Today most of Cathy’s pieces are beaded, although she often incorporates silver clay elements, working in her well-lit studio that was once the pool house. “What’s most time consuming is the concept and design,” she says. “I build a piece up and tear it down a number of times before it is done.”

She’s just started showing her work — first at Fort Mason and then at a show featuring Atherton artists at Holbrook Palmer Park. This is the first year she’s been accepted as a Silicon Valley Open Studios artist.

“I love the creativity and the exploration of different elements that goes into each piece,” she says. “It’s wonderful to work with the various textures and color. I can sometimes work for hours with completing a piece. I guess I’m a great starter of things but not always a finisher!”

Other local artists will also be having open studios this weekend. Here’s a recap.