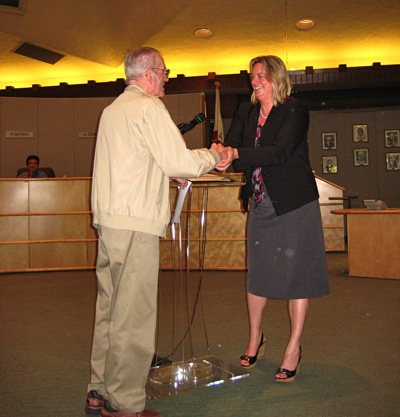 At last night’s Menlo Park City Council meeting, life long Menlo Park resident Frank Helfrich was commended for his service to the city as a 30-year volunteer with the Menlo Park Historical Association. The proclamation, read by Mayor Kirsten Keith, cited his unparalleled knowledge of the city, making him the  “go-to guy for both routine and challenging questions on the history of Menlo Park from local citizens, city staff, elected officials, nearby communities, citizens from out of state and internationally.”

Frank grew up in a small house on Alameda and Cedar and never left the neighborhood, except for a stint in the Army. He attended Los Lomitas School, graduating with 21 other students in 1943. “Growing up on the Alameda was sometimes full of surprises,” he wrote in August 1994 issue of the Menlo Park Historical Association Newsletter. “…the area along the Alameda [in the late 1920s] was bootleg country. My mother became aware of this when a still, located under a pile of building material, blew up and nails rained across Cedar Street into our backyard. Fortunately, our yard was clear of children at the time as my mother had just called them in for lunch.

“Our five goats always caused lots of talk in the neighborhood. In Spring, my mother would sell off the surplus baby goats and would put up a sign on the gate, ‘Kids for Sale.’ People along the Alameda often saw the sign and wondered which of the seven Helfrich children were to be disposed of.”

Over the years Frank has shared his knowledge of Menlo Park through speaking engagements and articles. He’s considered the archivist of city records, articles, letters and a variety of important historical documents.