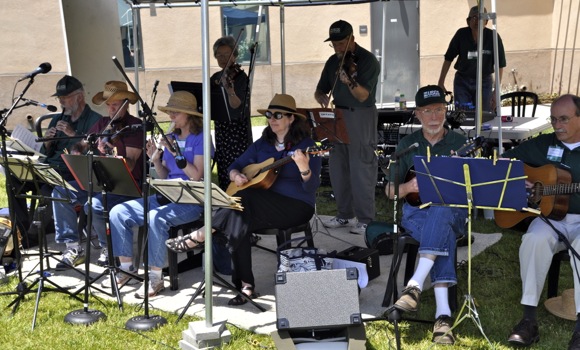 The way founding Duckweed band member Warren Nockleberg remembers it, he and Vic Mossotti found themselves in a largely unoccupied space after Building 2 was remodeled. “Vic had taken old-time fiddle lessons, and I play the mandolin and concertina, so we started playing in my office, given that there were few people around for us to bother,” Warren recalled.

They were soon joined by Florence Wong (violin) and Stephanie Ross (guitar). As the group grew, they moved into the conference room, playing together at noon on Fridays. “Geologists tend to travel a lot,” said Stephanie, who also sings. “So, it’s whoever shows up.” 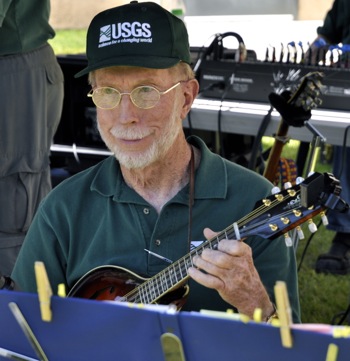 According to Warren (pictured at right), the group fluctuates in number from about eight to twelve, and, over the years has compiled a songbook of about 300 tunes. “We’re an old time string band, a genre of music that precedes bluegrass,” he explained. Newer member Ray Wilson has introduced the group to Celtic tunes.

Initially a leaderless group, Florence is now the acknowledged group organizer. “Duckweed has worked its way into the fabric of USGS campus events in Menlo Park, so we are routinely invited to play the campus-wide winter social, summer barbecue, December holiday party, or the occasional retirement party.”

“Our band members are always happy to play these events if they have no schedule conflicts, so I check for the number of players who will be available, solicit tune suggestions and organize a playlist, arrange for space/chairs/amplification as needed and email updates.”

Getting ready for a performance, such as the recent one at the USGS open house, tends to “push the group forward,” said Stephanie. “But even if we don’t have a performance, we still get together at noon on Fridays.

“One thing I like about this group is that we come from different parts of Menlo’s USGS campus. We meet people who we wouldn’t otherwise come into contact with and that’s a real benefit.”

Duckweed rarely performs off campus. Explained Warren: “We’re just amateurs that play music together.” Asked about the group’s name, he said: “Duckweed is the world’s most prevalent aquatic plant — a pest. We spread like wildfire, like duckweed.”

You can sample some Duckweed music on the USGS website.

I heard this music on the radio today and loved it. I can’ t find it anywhere else though. Do these guys have a CD? Thank you Josephine