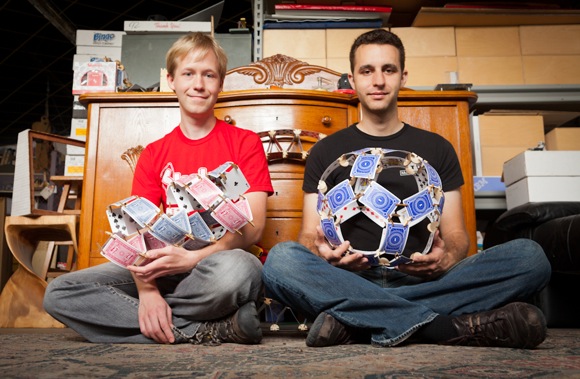 Evan Murphy and Michael Woods met at CalTech and proceeded on the typical geek course after graduating, joining forces on developing an email analytics software program for attorneys. Abandoning that project, they thought about going out and getting jobs. But, Michael had a design for a Trebuchet — and, well, bringing it to market sounded like a lot more fun.

“We camped out for three weeks straight and built a prototype that we were sure we could replicate on a laser cutter,” said Evan, co-founder with Michael of E&M Labs based in Menlo Park. “We put it on some social websites and got picked up by some big sites. That generated around 1,800 orders for the product we called The Trebuchette.”

They worked almost 24 hours a day to ship orders by Christmas 2011. “What we learned from bringing it to market was how to run a business,” said Evan. 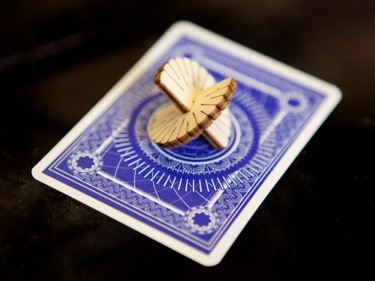 Fast forward to today, where they find themselves in the toy business, at least loosely speaking. A friend of theirs, Marshall Grinstead, had an idea about something that could be used to construct things with playing cards. As they’d done with The Trebuchette, they put their new project on Kickstarter to get funding, raising over $65,000 from over 1,000 backers. And Skallops were born.

Skallops are laser cut clips made out of Balkan birch plywood that hold the playing cards — a deck comes with each box of 52 Skallops. They approached the design with the intensity of a software development project. “The notches are different lengths, so they are less fragile and they can be put together cross wise,” said Michael.

“We keep all of our production local,” added Evan. “It’s more expensive than manufacturing overseas but when it comes to getting things out the door, it’s much more efficient. When you encounter a problem, you can talk it over.”

The E&M team got to see the public interact with the Skallops at the recent Maker’s Faire.

“All three of us are engineers of one stripe or another,” said Evan. “We looked at Skallops as an engineering toy, but kids and adults go at it with a more artistic mind set. We hadn’t thought about making hats, for example.”

Future plans are to launch an online community showcasing people’s design and to expand the Skallops line, that is, if they don’t play away the day, which Evan admits, is a danger. “We’re really fortunate that part of the product and part of the appeal is showing people cool things to do.”

You’ll know they’ve hit it big when the Russians start complaining about the lack of birch branches in the banyas.