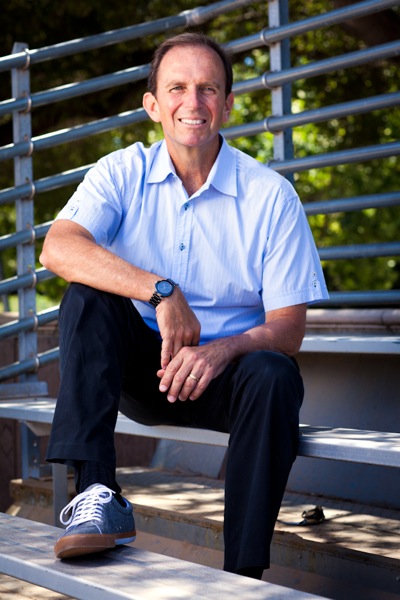 Editor’s note: Over the past 30 years, Atherton resident Ted Robinson has broadcast every major sport, lots of “minor” sports and covered seven Olympics. For his efforts, he’s been awarded two Emmy awards. He’ll be at the Summer Olympics this year covering diving and calling the Gold Medal men’s singles tennis  match. He talked to InMenlo recently about his early broadcasting days at Notre Dame. Here he replies to our question: “What are the five most exciting moments in sports you’ve broadcast?” (The order is as they came to Ted’s mind, not in rank.)

#1. Maybe because it’s the most recent, the 49ers winning playoff game against the Saints comes to mind first. Calling the last four minutes of that game was so intense that I blew out my right vocal cord just like a flat tire. Luckily, I was fine by the following Sunday.

#2. The U.S. winning the Gold Medal in baseball at the 2000 Olympics in Sydney was great because the U.S. had sort of a ragtag team — a combination of younger guys on the rise and older guys. Ben Sheets was the pitcher who shut Cuba out 4-0.

I remember the players all standing on the podium. Tommy Lasorda, the team’s manager, was stunned because he didn’t get a medal — only the competitors get medals at the Olympics, not the coaches. As the medals were put around their necks, every guy — even the veterans in their 30s — had tears running down their cheeks.

#3. Barry Bond’s 70th home run in 2001 stands out. We’d gotten stranded in Houston following 9/11 and had to go back to make up the game. A rookie came in to pitch, and Barry hit his 70th. Barry had been a polarizing figure in the club house, but the entire team came out to congratulate him. And Willie [Mays], one of the guiding forces in Barry’s life, was there, too.

#4. This would be the 1998 NCAA tournament when Valparaiso played a first round game against Ole Miss, which was nationally ranked. Valparaiso threw a length of the court pass to its best player, who made a three point basket to win the game. The player was the son of the head coach, who’d chosen to go to Valparaiso to play for his father even though he had other options, so there was a great personal story, too. It was a real life Hoosiers.

#5. The 2008 Wimbledon men’s single finals between #1-ranked Roger Federer against #2-ranked Rafael Nadal. The match itself spanned almost five hours but with rain delays it took 7 1/2 hours. I think I only got one 90 second break!

please pass along to mr. robinson how much he means to this sports fan. i was mad at him for leaving the giants, but he takes the entire world of sports (literally) and describes it as if i were there watching. continued health and happiness. tobias puente