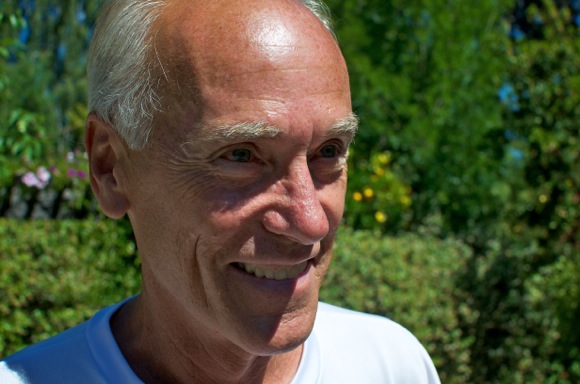 Bob Holmes knows a lot of people in Menlo Park. After all, he’s lived almost his entire life here (taking brief time outs for the Navy and college). But a lot more people know Bob, even if not by name.

“People come up to me and say, ‘I know you. You’re the guy who walks all over town,'” Bob said recently, seated in his well-landscaped Menlo backyard. (Yes, we admit this should have been a walking interview.)

Bob and his wife moved into their current home 14 years ago, about the time Bob retired. He started walking his cross-the-street neighbor’s kids to or from Oak Knoll School. He’d been a lifetime jogger but a spinal injury made that pursuit more difficult. His wife suggested walking, and he took her advice. 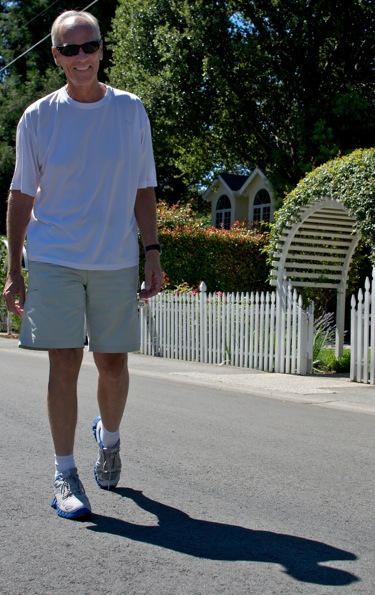 He now logs about 25 miles a week. “I walk to errands, to grocery shop, to check on my Mom who lives in Sharon Heights,” he said. “About everything I do is on foot.” (That, of course, explains why so many locals are familiar with the tall man with a purposeful stride.)

“Walking is a very social activity,” he continued. “And, I’ve never had a conversation I didn’t like!”

Bob recently became a Reebok man, at the suggestion of his grandson. “I’d been a long time Brooks person, the shoe I wore when I jogged. But a redesign changed the way they fit and I switched to Nike. I’m pleased with the new Reebok’s.”

A man who really knows Menlo and can remember long gone stores that once lined El Camino, Bob moved here with his parents in 1949. They lived first on Sherman, then moved out to Ladera when it was just four streets, finally settling in Sharon Heights when it was first developed.

“I was part of the first class to graduate from La Entrada and went to Woodside High School when kids who lived in far west Menlo still went there,” he said.

Bob points out that he’s a walker, not a hiker, although his favorite walks are mountain high in Lake Tahoe. As for Menlo, there is no favorite. “I just walk the streets,” he said.

One thing is for sure: Menlo Park would not be the same without Bob!

It’s been a few years since I last saw you. I’m now living the good life in Mesa, AZ, about 30 minutes east of Phoenix. Briefly, if I can. I will try to give you an update on what’s happening in my journey in life.
When I got divorced in 2009, we split the property, money, ect. I got the two houses in Mesa, the household furniture, a car, she got the 401 K, a car, and more.
Fast forward, I had a heart issue, atrib, which after several ambulance runs to the ER, I had a pacemaker installed in my chest. Since then, life is good, no more heart issues. I take lots of meds, but my blood pressure is normal.

I miss the old OD, Eastman days, my old customers, and my friends, and YOU. You were a great manager, and I wish I could have worked for you,
forever.
Take care and by the way, I’m going to be in San Jose on Aug 17, until Aug 27. I will try to reach you and see if we could have lunch.