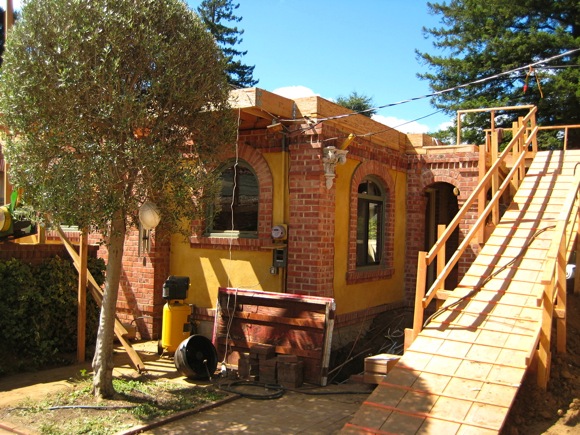 A year ago Scott Scherer (pictured right below), his wife Meg McGraw-Scherer, and their two children moved into the house in Menlo Park that we featured here in 2010 as The jewel of Santa Cruz Avenue. They fell in love with the unique architecture of the house and its many artistic and historic features, including doors and fixtures from the Flood Estate. Realizing the house was much too small for their family, they have now embarked on a construction project to add a second floor while maintaining the integrity of the original architecture to the extent possible. 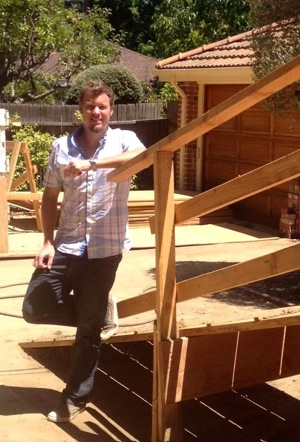 When the James C. Flood estate, known as Linden Towers, was completed in 1880, it was the largest house west of the Mississippi. The property was sold for the Lindenwood subdivision in 1934 and the house itself demolished. About that time the brothers Bartolome (“Bert”) and John Martinetto (born in ’94 and ’00 respectively) were beginning the construction of their dream house, to be located on Santa Cruz Avenue in Menlo Park.

They apparently acquired this property while doing construction work at Stanford University. They were able to incorporate a number of artifacts from the recently demolished Flood Estate into their house. They also found discarded but interesting elements from various Stanford buildings and used them in artistic arrangements.

When completed (in early 1940s), Bert, a brick layer by profession, lived in the house, while John lived within biking distance. The brothers, well known in Menlo Park, were often seen riding around on their bicycles. They died in 1979 within a few months of each other and are buried in Holy Cross Cemetery ½ mile away.

The Scherers would like not only to preserve the Martinettos’ artistic work, but, if possible, to enlarge on it. They are actively looking for additional artifacts from the now long extinct Flood Estate as well as searching for fixtures from the 1880 period (or reproductions of such fixtures) to equip the new living space. Additional mahogany doors to match the existing Flood estate doors will be fabricated by the building contractor, Cambridge Builders, in their cabinet shop.

The house has a matching single-car garage that the Scherer’s plan to preserve. We hope to be able to post a third article in 2013 after the construction is completed. 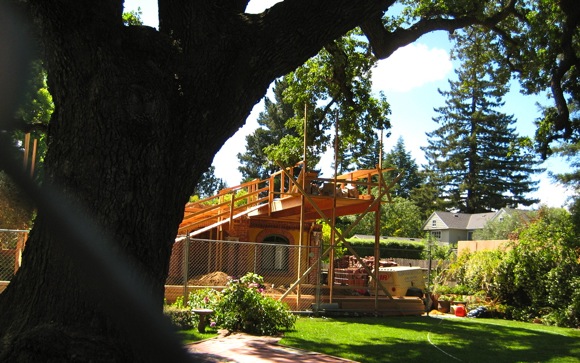 Our home in Woodside also was built (1935) with salvaged materials from the dismantled Flood mansion. We have a fireplace, timbers, carriage house doors, windows and stained glass. We’re told that our family room was built with wood from the torn down tack room. I’d be pleased to show the Scherers our house, and maybe we could compare notes. Good luck with the restoration…our house has been a labor of love, and no regrets!

hi
I will visit Menlo Park next October .
my home is in menlo park, galway , ireland.
I would like to meet anybody interested in
the link with Ireland and the history of that link.

My husband Bob and I rented that house from Aug 2009- Aug 2010. We absolutely loved it and were sad to leave at the end of my sabbatical year. We are delighted to see so much care going into the renovation and expansion!

My Great Aunt and Uncle lived in the original house for a number of years and I have fond memories of the place. We used to cycle in the area, and I caused confusion by enjoying the morning run down to Peets Coffee! rather than use the truck. It’s a lovely plot.