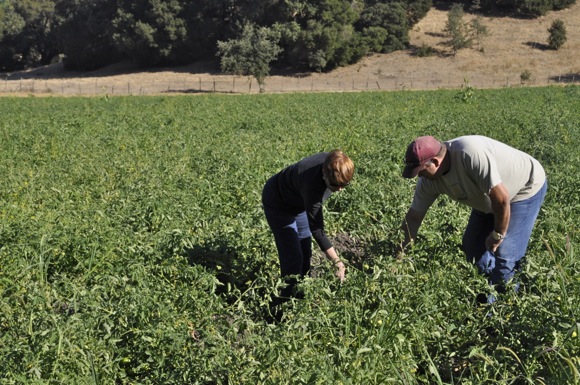 With news that Webb Ranch’s Ace 55 tomatoes were ripening and available for purchase ($3.49 a pound), we wandered out for a chat with produce market manager Deano Lovecchi, who took us on a tour of the fields. 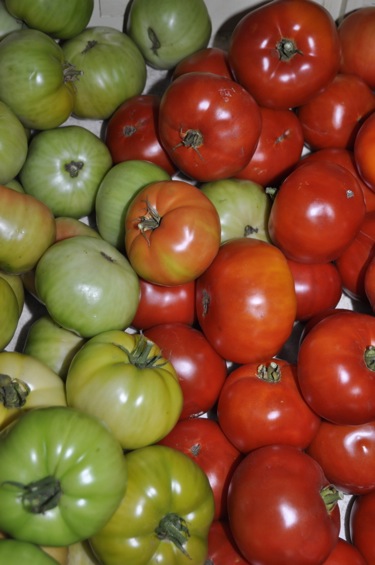 About the Ace 55: An individual tomato can weigh about a half a pound. It’s round in shape, has a thickish skin and is low in acidity, which is good or bad, depending on the tomato fancier’s palate. It’s cylindrical shape makes for pretty presentation on a plate. At Webb, they’ll be harvesting tomatoes until the end of October.

Webb-grown Ace tomatoes are picked both green and red and, by special order, pink. “That’s usually the case when people are going to Tahoe for a week and want tomatoes to ripen over the course of their stay,” said Deano. 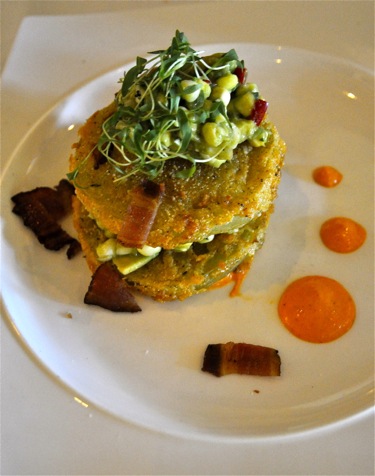 The ranch’s tomatoes are not staked, nor is the field weeded. “People are surprised to see the weeds in the field,” said Deano. “But the weeds have no affect on the tomatoes growth or taste, so it’s really doesn’t make sense to incur the labor cost to pull the weeds.”

Deano mentioned that earlier in the day Flea Street Cafe owner Jesse Cool had been over to pick up a crate of green tomatoes. She serves them at her restaurant, currently fried two to a plate topped with a corn relish and adorned with slivers of bacon. It’s a “wow” dish.

Her cookbook, Simply Organic: A Cookbook for Sustainable, Seasonal, and Local Ingredients

, features a recipe for grilled green tomatoes, which she says she remembers eating “my Dad’s way, straight off the barbecue, smoky and succulent.” Her recipe follows (with her permission). We think it’s the perfect addition to a Labor Day weekend barbeque.

Put the tomatoes in a large bowl. Add the oil, garlic and oregano. Toss the tomatoes to thoroughly coat. Season generously with salt and pepper. Place the tomatoes on the grill and cook each side for 3 to 5 minutes, or until the tomatoes are tender.