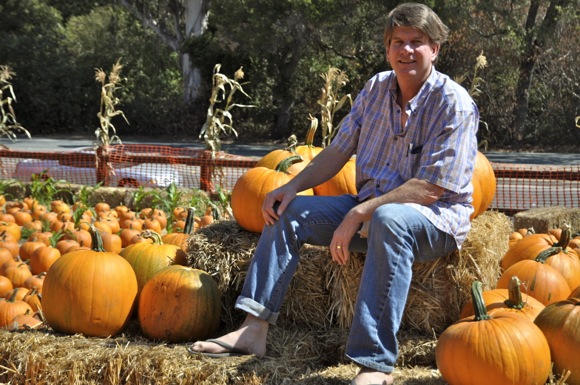 Webb Ranch’s Pumpkin Patch officially opens today for its annual four-week march to Halloween on October 31. We stopped by a couple of days ago to talk to Gary Webb (pictured above sitting on hay bales) about what’s on tap this year for this Menlo Park favorite. 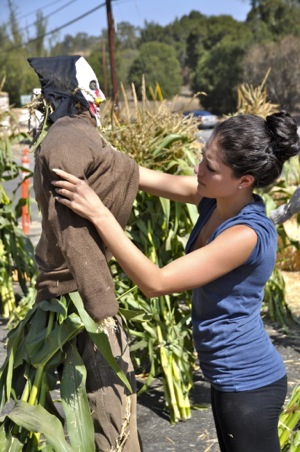 He told us that, per usual, there will be 18 varieties of pumpkins to choose from, from maxi to mini, and colors that include red, white and blue, as well the traditional orange.  About 30% of the pumpkins sold are grown on the Ranch. The usual ghoulish-faced scare crows (we saw one getting “stuffed”) will stand guard around the perimeter.

A new-this-year pumpkin-shaped bouncy house has taken up residence in the western corner of the Patch. Up the hill, visitors will find not only the traditional haunted  house (not for the preschool set — too real!) but also a new-this-year train, which Gary was awaiting arrival of as we visited. He’s also hopeful that there will be a photo booth and face painting to go along with the popular hay and pony rides. (Note: there’s a charge for some activities.)

Inside the Ranch produce stand, we chatted with manager Deano Lovecchio’s wife Shyer. We were curious if any of the pumpkins sold got eaten. “I don’t think so,” she said, “we don’t promote that use. The Sugar Pie pumpkins can be used for making soup. But that’s only for people who want to be extremely adventuresome, as it’s not easy.”

Webb’s Pumpkin Patch, haunted house and bouncy house are open daily form 9:00 am to 6:00 pm. Hours for others activities vary, with some available only on the weekends.

This looks like a great idea. Just wondering, what name of pumpkin seeds did you use and what was the Date you planted the seeds and what type of fertilizer did you use.
Just courious. I planted pumpkins the 14 of July 2012. I have vines and blooms every where but only one pumpkin and it’s green and the size of soft ball. I planted these for my Grand Kids but don’t look like they will get any from Grandpa. We’ll have to all come see you. Thanks