How an 8-year-old mastered his Menlo Park neighborhood 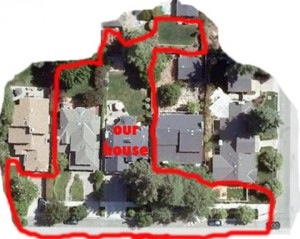 Yesterday, my son Marco (8) took Wayne, a school friend, to the house of Jacob, another school friend. Then, the three of them made their way to our house. They made this entire journey, 1-1/2 miles, without any adults involved, either in transporting or in planning, and Marco was the leader. And, they did it in the rain, with no raincoats.

Marco can do all this on his own, too. In fact, he usually rides his bike home alone. This degree of independent mobility is quite remarkable for an eight-year-old in the 21st Century. How did he get to this point?

Well, I didn’t pull a “Lenore Skenazy.” Skenazy became famous back in 2008 for leaving her nine-year-old son at Bloomingdale’s in Manhattan and telling him to get back to their Queens home on his own, via a subway and bus. Instead, I’ve worked with Marco very consciously for many years to hone his independence skills. He had no single dramatic “OK, you’re on your own!” moment.

The maps displayed with this article show a steady progression from age five to six to seven to eight (top to bottom). In the first two of these years, I worked with him practically every day on independence skills. Today, I’m still involved daily, but I act more as an advisor.

Certainly, Lenore Skenazy’s approach to granting independence was a lot more efficient than mine was, but I’d argue that our time over these last three years wasn’t wasted by any means.

Marco has gained a broad set of very valuable skills, not just the experience of returning home from one place. He can navigate pretty much anywhere in our neighborhood. He is comfortable going to over a dozen places in our neighborhood – friends’ houses, businesses, parks, and his school – and seeking out people on his own. He has begun to learn how to improvise when some unplanned thing happens (e.g. when no one’s home). He plans ahead with his friends and pulls all the pieces together to make play sessions happen, across multiple destinations.

His knowledge and skills are so deep that I would say that Marco has “mastered” his neighborhood, both geographically and socially. That feels very good for an eight-year-old kid.