Willows Market is home to over 1,000 beers in Menlo Park, tended to by owner Nick Sharma 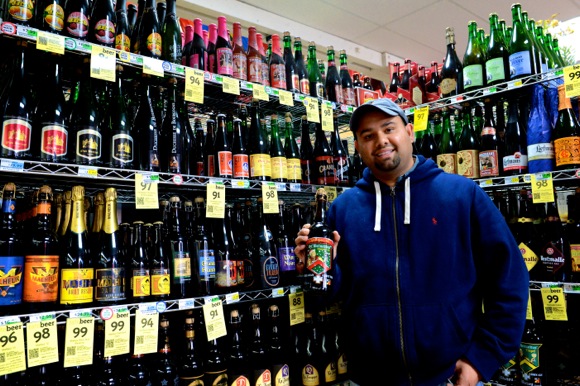 The Willow’s Market, owned by Nick Sharma, has a lot going on for it — aside from being an upscale neighborhood market.  There are week night events ranging from gourmet food trucks on Monday and wine tastings on Wednesdays. But it’s the focus on beer that really distinguishes the market, located on the corner of Willow Rd. and Middlefield Ave. in Menlo Park.

When Nick bought the store in 2006 he had a vision of “becoming the best at something, being world famous, and making it really cool.” He realized while many stores in the area were focused on wine, there were no places that provided access and knowledge about hard-to-find craft beers. And so his collection began with about 20 unique brews.

He now carries over 1,000 beers, including collectables that mature over time. He offers the full spectrum, from Bud to bottles that sell for over $350. Nick notes that there is “no mold for beer drinkers.”  He helps enthusiasts find whatever suits their palate and introduces them to beers that they have never heard of or imagined.

Word of the wide beer selection offered at the market is out, and he receives calls from loyal customers throughout California who make appointments to come and buy assortments that they can’t find elsewhere. So, his dream of making Willow’s Market a destination is coming true.

Nick says that he has double the best selection in Northern California, which was confirmed by Sunset Magazine, which noted the market as one of the three top bottle shops in the Bay Area, pointing out that it “includes some almost impossible-to-find barrel-aged ales.”

For the holidays, the Willows Market carries several dozen seasonal beers, including large bottle Christmas ales and Kosher brews. Shopping for a beer lover, Nick will help you make a selection or buy a gift certificate. You’ll also be able to mix any four beers, no matter the package (single bottles or six packs) and receive a 10 percent discount.