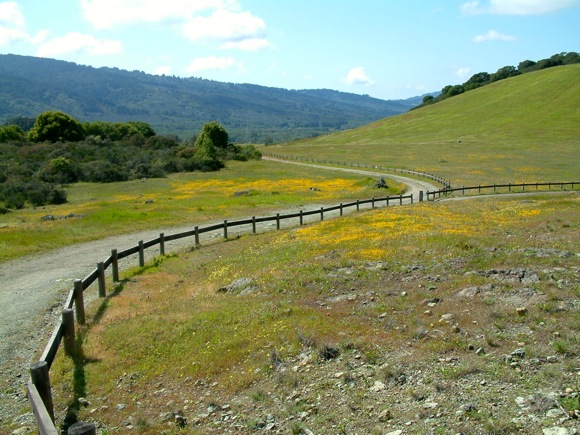 Edgewood Park is one of the closest open spaces to Menlo Park. Throughout 2013, the Friends of Edgewood are celebrating their 20th anniversary and the designation of the Park as a natural preserve.

The Friends group was founded by many of the individuals in the Save Edgewood Park Coalition who struggled in the early 90’s to protect Edgewood. In 1993, the San Mateo County Board of Supervisors voted to preserve the park from development in perpetuity.

Edgewood Park, which can be seen driving north on 280, is known throughout the Bay Area for its spectacular springtime wildflower displays. The Friends of Edgewood volunteer over 4,000 hours annually to offer docent-led wildflower walks, host visitors in the new Bill and Jean Lane Education Center, and support the California Native Plant Society in weeding and habitat restoration efforts at Edgewood. The Friends have been called “the best little volunteer group on the peninsula.”

To celebrate this milestone, the Friends and San Mateo County Parks are presenting 2013: Year of Edgewood. Special guided nighttime walks, guided access to sensitive areas normally off-limits, and walks led by distinguished naturalists, scientists, and professional photographers highlight these events. This access has never been possible in the past, but is offered now through partnership with San Mateo County Parks.

Two events focus on the fate of the threatened Bay checkerspot butterfly. Dr. Stuart Weiss, biologist with Creekside Center for Earth Observation, will lead a walk into the butterfly’s sensitive habitat and describe how this insect, which formerly numbered in the thousands, went extinct at Edgewood. He will discuss the effort currently underway to reintroduce this fragile species. Perhaps the most unique activity is the opportunity for visitors to adopt a Bay checkerspot butterfly caterpillar. These adopted caterpillars will be placed in the butterfly habitat as part of the species reintroduction.

The Friends of Edgewood developed all of these events with three goals in mind:

All events are free, but donations are suggested and greatly appreciated. Because space is very limited, visitors must register in advance. To register or to get more information, please visit the organization’s website.