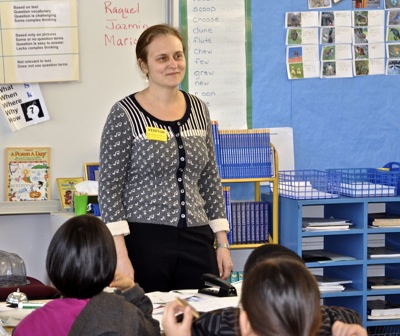 By the time we caught up with Menlo Park resident Andrea Palmer, she was just wrapping up her duties as a Mid-Peninsula League of the San Francisco Symphony docent at Willow Oaks School by delivering cookies. She wore her signature musical note sweater and presented the kids with cookies in the shape of musical notes.

It was her second year at that particular school, but she’s been a volunteer docent for much longer. “I started volunteering as a docent in 1995 when my children were young,” she said. “I requested the assignment at Willow Oaks because I live nearby.”

Last weekend the Mid-Peninsula League hosted more than 350 third graders from the Ravenswood School District at a Concerts for Kids performed at Davies Symphony Hall in San Francisco. The kids boarded charter buses that transported them to the City where they heard the orchestra perform music written by Tchaikovsky, Schubert, Stravinsky, Rimsky-Korsakov, Dvořák, Mahler, and Rossini.

Docents have been visiting Ravenswood school classrooms since November, introducing students to the music and instruments and preparing them for the field trip. The Mid-Peninsula League raises funds for the symphony’s educational outreach programs at its annual Bridge Tournament and Luncheon, to be held this year on Tuesday, February 5, at the Menlo Circus Club [contact Anne Dauer at 650-327-2249 to reserve].

“The kids are really wonderful,” said Andrea, “and I think it’s so important to expose kids to symphonic music. I’m always amazed at what pieces they like. They heard the William Tell Overture this year, and you’d think that would be an obvious choice. But riding back on the bus their choices were much more diverse. Every year, experiencing the music with the kids is so rewarding.”

A wonderful coverage of this truly inspiring story of the Concerts for Kids program in the Ravenswood Schools. These students never forget this experience; ask almost any adult about attending their first concert experience and watch the smiles on their faces. Music should be available to all students everywhere. It is also so rewarding for the school and music teachers to see the students’ reactions.

Thank you so much for this article,