Mike Rosenthal finds a new calling as a chalk artist (while keeping his day job!) 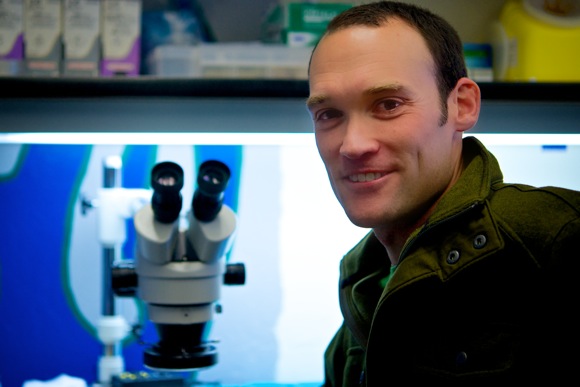 Menlo Park resident Michael Rosenthal likes to describe himself as “wide in many things and deep in a few.” He played both music and water polo while at Stanford where he was initially premed.

“My father is a doctor and I thought I’d follow that path,” he explained when we visited his TechShop space which serves as headquarters for D3DC, where he partners with three others investing and incubating medical devices. “But one day a bunch of us put together a gas powered blender made out of a weed wacker and started taking it around to tailgating parties in a little red wagon. With that, my focus shifted to pursuing a degree in mechanical engineering!”

However, we weren’t there to talk to him about medical device development, but rather a newer pursuit that further widened his capabilities — his talent as a chalk artist. How he was “discovered” and later created the chalkboard menu at Freewheel Brewery is a story in itself.

“I was at my sister Ellen’s and had lost in Karaoke Revolution,” he recalled. “I wandered over to a chalkboard and started drawing. Tom Bucka [the son of Freewheel Brewery partner Larry Bucka] thought I was some urban, late night chalk artist. I got this email from Ellen saying these guys who were opening a brewery were interested in me doing their chalkboard menu.

“The irony is that I had been really immersed in getting this company started, plus being a husband and father to three kids. I’d been thinking I needed some kind of creative outlet – maybe starting to play music again. Instead, it was creating chalk art as well as the sculpture frame around the menu.”

Like many of the medical devices D3DC is developing, the next iteration of the chalk art menu is top secret.