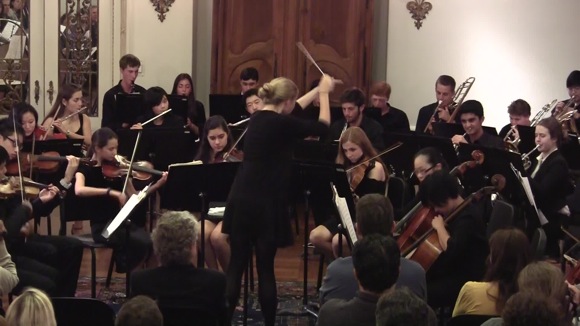 Menlo School sophomore Shea Ketsdever, the Upper School’s Orchestra Assistant Conductor, directs the first-ever Menlo Invitational Orchestra Festival on Saturday, March 9. School orchestras from around the Peninsula —five visiting ensembles including Menlo’s Orchestra and over 100 musicians —vwill rehearse, receive instrumental coaching from area professionals and perform together in a free concert to be held the same afternoon from 4:30 to 6:00 pm in Menlo School’s Creative Arts and DesignCenter.

According to Shea (pictured above conducting another performance), “The idea behind the festival is to provide an opportunity for young musicians in the peninsula to collaborate and perform together. The highlight of the festival is the massed ensemble, composed of all participants performing together in the final two pieces. There will also be performances by several individual group ensembles.”

Participating in the festival are the following school groups/ensembles: