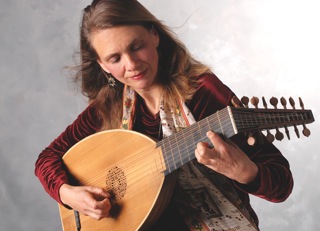 Bay Area performer and Stanford University graduate Doris Williams will perform Lute Songs and Solos of the Renaissance on Saturday, April 6, from 11:00 am to noon at the Menlo Park Council Chambers, 701 Laurel Street. She will be accompanied by Claudia Gantivar on Renaissance recorders, she’ll perform a repertoire of Celtic and Renaissance music.

Williams has been singing since she was very young, starting at the age of two. She started piano lessons at 5 and voice at 14, and continued piano until college. While still a teenager, she fell in love with early music. When she was at Oakland University in Michigan her parents gave her a lute for a birthday present. She received degrees from Oakland University and Stanford University  in vocal music of the Renaissance and Baroque periods. She has performed with numerous chamber choirs, including the California Bach Society, Philharmonia Baroque Chorus, and the San Francisco Choral Artists.

Sean Fullerton, music writer and producer writes: “Without question, Doris is one of the most gifted artists working today. Whether singing Elizabethan folk tunes or classical arias, playing jazz piano or writing singularly original songs, this soulful young woman is an unstoppable force of creation.”

This free event is made possible by the Friends of the Menlo Park Library. Free wheelchair accessible van service is available for Menlo Park area seniors and people with disabilities. Call 330-2512 for van reservations. For event details, call Roberta Roth, at 650-330-2512 or e-mail Roberta at rlroth@menlopark.org.