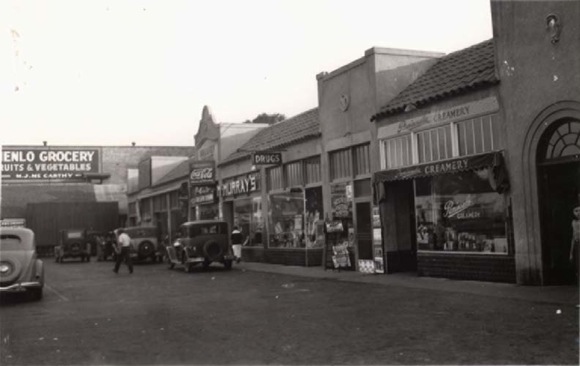 The photo above showing the western side of El Camino Real between Santa Cruz and Oak Grove avenues in Menlo Park dates from about 1937.

Menlo Grocery at 1101 El Camino was the successor to the venerable Duff & Doyle’s General Store, which was liquidated in the early 1920s. The second floor had long been occupied by various civic organizations including the Masonic Hall.

The large brick Duff & Doyle building, constructed in the late 19th century, was heavily damaged in the ’06 earthquake, but then repaired. The building was raised in 1942 to make possible the widening of El Camino Real toward the west [Ref.: Svanevik, Beyond the Gate, p. 66], to be replaced first by a restaurant (The Walnut Tree, with private parking on the Santa Cruz Avenue side), and later by the complex that today consists of U.S. Bank, Stacks and Color Me Mine, with parking underneath.

The remaining buildings in the earlier photo are still in use, originally constructed (in the early 1930s?) back from El Camino to provide space for private parking. The car on the left in the photo may actually be traveling south on El Camino. There appears to be a truck parked in front of Safeway. Safeway moved to 611 Santa Cruz Avenue about 1950 and then to 525 El Camino about 1955.

Joe Prein, who later had his own shop at 683 Santa Cruz Avenue, sold radios, phonographs and related equipment at McMurray’s. Just out of view in the photo, in separate but still existing buildings, were the Post Office (at this location as early as 1935) and the Bank of America (first established in Menlo Park in 1937). 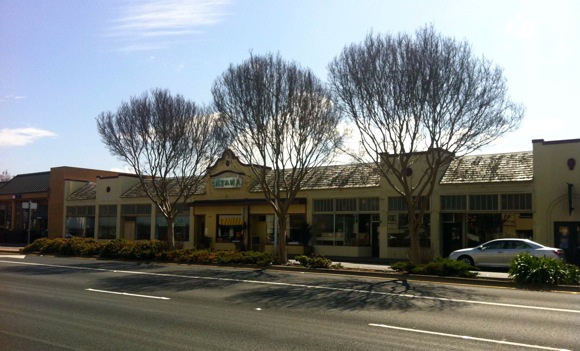 After the Duff and Doyle building was demolished, the lot was empty for quite awhile. In 1959 it was being used by Peninsula Chevrolet Used Cars. In 1963 Gale’s Coffee Shop was located there. The first mention of The Walnut Tree in Polk’s Directory was 1974.