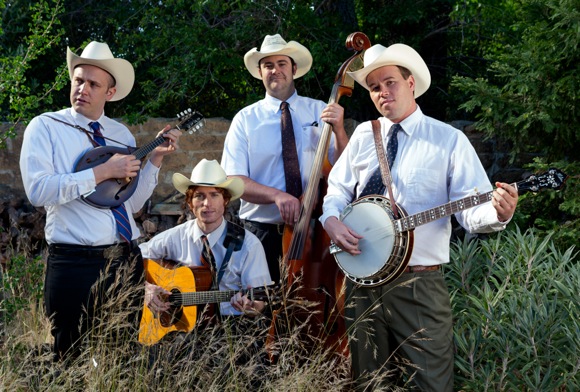 When we first profiled local bluegrass band Windy Hill in 2011, the then five-man group had just released their first CD and were starting to get steady gigs in the Bay Area.

Ryan and Thomas have written the majority of the songs for their latest CD, Lonesome Garbage Man, which they’ll be playing selections from tomorrow night at a CD release party at Club Fox in Redwood City. The Peninsula appearance is relatively rare; they play regularly at Plough and Stars and Amnesia in San Francisco.

“The band has evolved a ton,” said Ryan during an interview at his Mom’s house that sits at the foot of Windy Hill (hence the band’s name). “We’ve gone through stages musically. We’ve thought more about what we want to concentrate on. We’re writing a lot more original music — 16 of the 18 songs on the new CD are original.

“That said, we’re still playing bluegrass. It’s not traditional bluegrass nor is it jam grass. It’s our distinct sound of West Coast bluegrass.”

While the band has had personnel changes, they’ve managed to endure and evolve. We inquired about what kept them going. “We are all close friends,” said Ryan. “If we weren’t playing music, we’d still be hanging out together.