The Jewel of Santa Cruz Avenue grows up — beautifully 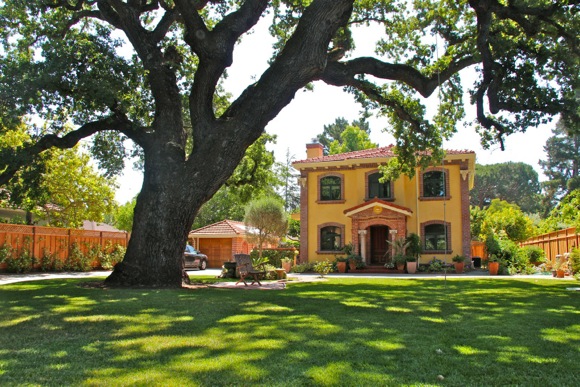 In the 1930s, the brothers Bert and John Bartolome, while engaged in construction work at Stanford University, began building what turned out to be a rather whimsical house — completed in the early 1940s — on Santa Cruz Avenue in Menlo Park. The Jewel of Santa Cruz Avenue was first described in a March 4, 2010, InMenlo posting.

Perhaps they were inspired in this direction after having acquired some choice articles from the just demolished (1934) Linden Towers. That monstrous estate — located in the center of today’s Lindenwood subdivision in Atherton — with its 44 rooms and a 150-ft tower was the largest house west of the Mississippi when it was built in 1880. It was a lavishly appointed mansion reflecting its $1 million price tag (equivalent to almost $20 million today). 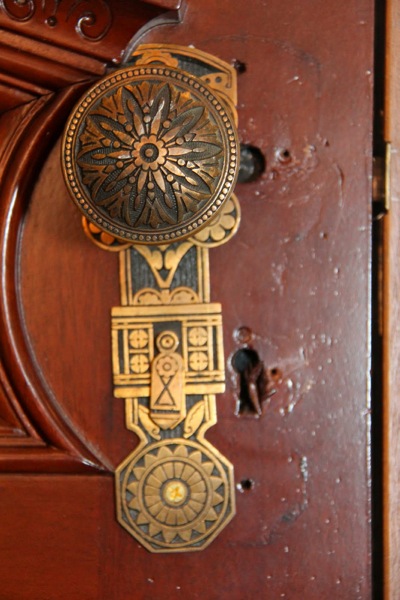 From the estate sale, the Bartolomes acquired a fireplace complete with marble columns and intricately carved doors, both designed for 12-foot ceilings. They cut the doors off at the bottoms, resulting in oddly low door knob locations. Also acquired were the elaborately patterned door knobs and hinges.

Current inhabitants Scott and Meg Scherer fell in love with the house when they moved to Menlo Park with their two young children in 2011. But with only two bedrooms and one bath, the approximately 1200-square-foot  house was just too small for them.

In June of 2012, they launched an ambitious project to add a second story, with the goal of retaining the original look and character of the house to the fullest extent possible. The contractor, Cambridge Builders (Larry Kahle architect) was equally excited about retaining the “renaissance style” of the house. An early stage of this project was described in an August 2, 2012, InMenlo posting. 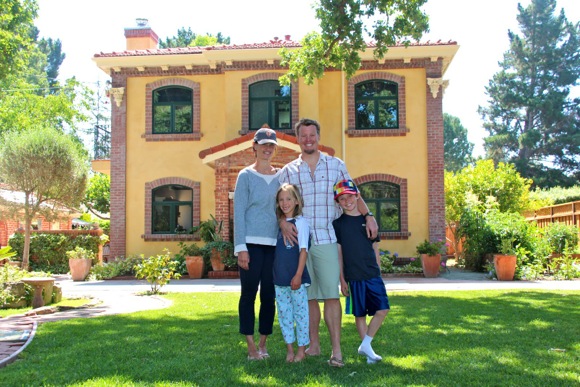 In March 2013, the Scherer family moved back into their enlarged house. The project took about a year and was not without its difficult moments. First the ceramic tile from the roof (still watertight after 60+ years) and other details were carefully removed and preserved for reinstallation. The masonry walls were found to be un-reinforced, which had to be corrected. The chimney needed to be reworked, which led to the discovery of the name FLOOD stenciled on the back of the mantel.

Since the bedrooms would be on the second floor, the rooms on the ground floor could be opened up. In particular, the wall between the kitchen and living room was removed and a former bedroom next to the kitchen was converted into a family room. These internal changes freed up several doors for use upstairs. Thus only a few additional doors had to be constructed, which was done with wood and 1879 hardware that closes matches the Flood originals. 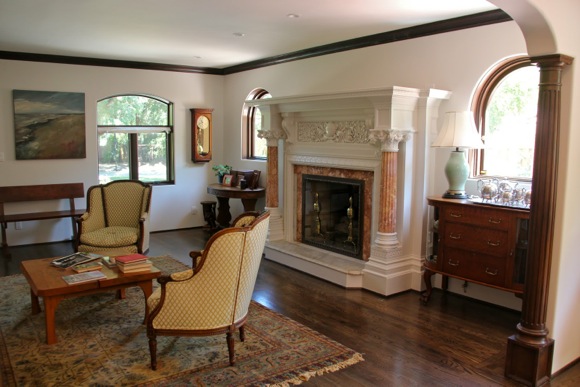 Another feature from the Flood estate that was retained was a beautiful fire place complete with high mantel and marble columns with matching hearth.

The original style of the exterior of the house has been retained in detail with the exception of the original ceramic chimney flue cap (retained for a yet to be determined application), which had to be replaced with a modern one.

The Bartolomes are avid collectors of “found art”. Many of their “finds” are come from San Francisquito Creek, dumped there by Stanford University, apparently in an early attempt to shore up the embankment. Most of this art work has been retained to enhance the landscaping and patio. The image below shows a piece of mosaic said to be from a portion of Memorial Church damaged in the 1906 earthquake. 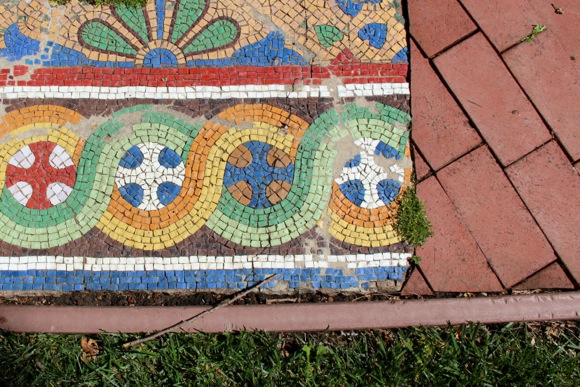 The deep, narrow lot is dominated by a beautiful aged oak tree in the center, which truly sets off the house but also constrains any attempt to increase the footprint of the house or garage. The latter, made for one car, exactly matches the house and has not been modified at all.

The finished house with three bedrooms, an office and two bathrooms upstairs, one bedroom and a bathroom downstairs, spacious living room/dining area/kitchen, and additional office space in the basement, perfectly meets the Scherers’ space requirements as well as their artistic sensibilities. One can also say it is a significant contribution to the Menlo Park environment.