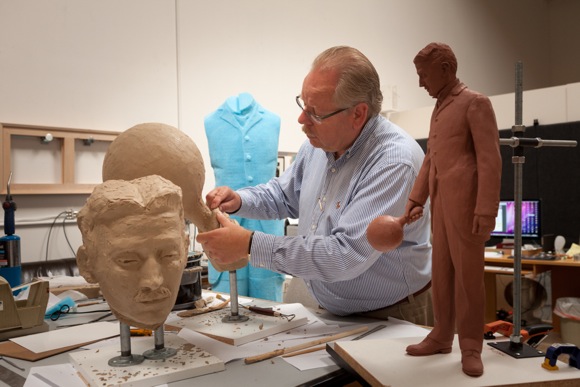 As we reported in June, Menlo Park artist Terry Guyer is working on a 7-foot bronze statue to honor Nikola Tesla, a project that was funded via Kickstarter.

Recently photographer Scott R. Kline visited Terry in his studio to photograph the progress (top photo), and Terry provided us with a rundown of how the statue is taking form:

“The 25” maquette was scanned by Scansite in Woodland, CA (Marin) using aerospace 3D scanning technology. Then the 3D information was transferred to Satellite Models in Belmont where it was enlarged to the full 7-foot monument size and formatted for their computer-controlled 5-axis milling machine cutting the enlarged shape of the maquette out of dense blue foam. 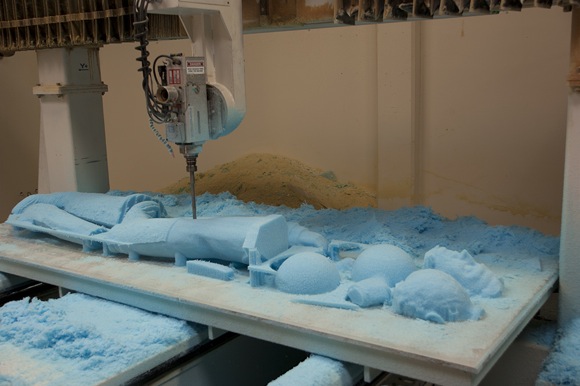 “The foam pieces are then glued together to form the armature (base) for final clay application of the statue which will then be cut apart, molded and cast in bronze. 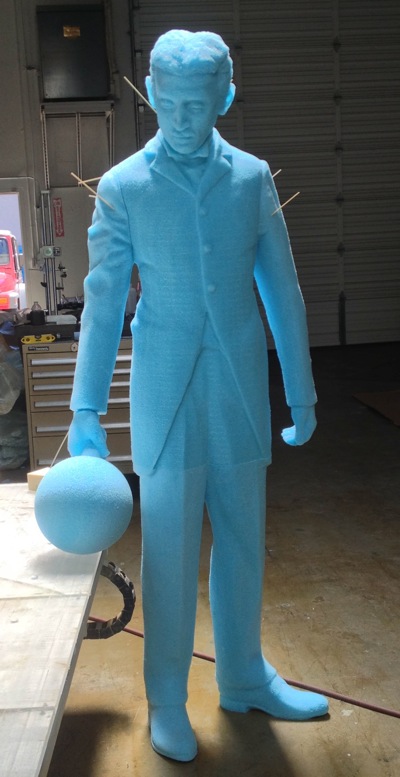 “Now I have it apart and am applying clay piece-by-piece before reassembling it into two sections, upper torso and legs, for transport to Artworks foundry in Berkeley.

“[Think of this stage as] ‘a high tech armature for the ancient art of bronze sculpture – what else for a Silicon Valley statue anyway?”

According to Terry, the completed Tesla statue is “proposed to be situated immediately after the off-ramp of Page Mill Road, one of Palo Alto’s busiest streets, leading to California Avenue, which means it will be seen by thousands of passing automobiles and pedestrians every day.”

Photo of Terry Guyer at work by Scott R. Kline

Thanks for the great article on Terry’s work and process. I would just like to correct one thing and that is; that Scansite is actually based in Woodacre, CA, instead of Woodland. We have been providing high end, 3D digital enlargement & reduction for artists, museums & cultural heritage institutions for nearly 20 years! It is always a pleasure to be involved with great projects such as Terry’s and I look forward to the the unveiling!