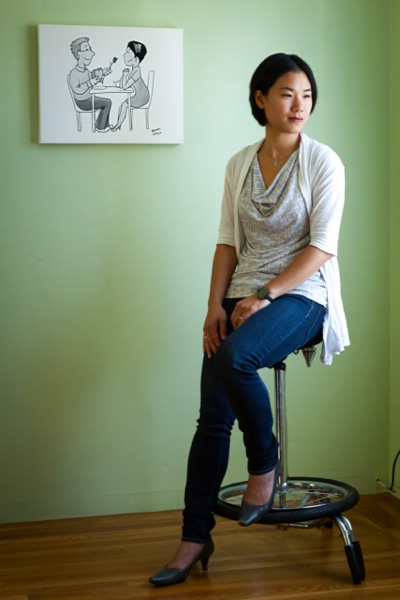 Menlo Park resident Alison Wong has been an independent product designer for the past three years. We talked with her in her home studio. She was photographed by Scott Kline sitting on a stool she made from spare bicycle parts.

InMenlo: How do you describe what you do?

Alison: I’m a product designer and design consultant. I design things that meet real world needs and sell them directly.

On the consulting side, I work with Fortune 100 companies with their innovation strategies.

InMenlo: When did you decide to pursue product design as a profession?

Alison: At high school [in St. Louis], I took a lot of art classes but also science and math classes. I decided to attend MIT [and pursue the latter] because I thought I could do art later.

I came west to attend Stanford where I got a masters in product design. It’s a very human-centered program that focuses on addressing real human needs.

Even though I work as a product designer, I still like to draw, especially comics.

InMenlo: Are there any designs you’ve done that stand out in your mind?

Alison: I helped influence the design of a new Heinz ketchup package called the Dip and Squeeze that I think is very useful. Also in the food area, I did the Orville Redenbacher popcorn pop-up bowl.

Another thing I worked on that’s still in the approval phase is a needle-less vaccine. The vaccine is delivered via a patch. I think the impact it could have is huge, especially in developing countries.

InMenlo: What other kinds of projects have you been involved in?

I did a TV show called The Big Brain Theory. I wanted to inspire young women to get into engineering. The show had eight guys and two women. It was kind of a top chef for engineers. The challenges were pretty intense. It was fun because it was really hands on, and it showed how fun and creative engineering can be.

Alison: What is the latest product you are working on?

Via Kickstarter, I recently got my Key Prop funded. It photo stand/tripod that fits iPhones and other smart phones. It comes with an app that takes  three-second, timed photos. That’s something most cameras can do but camera phones can not.

In Menlo: What are your other passions?

Alison: I’m very curious about the world and love to travel. I also play ice hockey on Thursday with a bunch of guys during lunch. And I love drawing and cartooning and am currently working on a book about wedding planning

Hello saw you on the Discovery show and just loved watching you. You seem truly kind, as well as, of course extremely smart. Just enjoyed watching you. Only saw a few shows and not even in the US. My friend from University lives in your town. Nice place, she and her family love Menlo Park. Just wondering if you will get this. Oh well it is like 1:30 am here, a day ahead of you. Have a busy day tomorrow. Hope you have a fun week-end. Michael