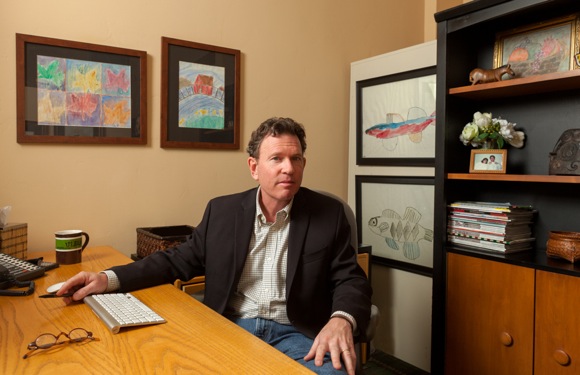 Sloane Citron not only runs his business 18 Media, which publishes Gentry and related magazine titles, in Menlo Park, he’s also a resident. He and his wife Judy raised their children here, all who attended public schools and graduated from Menlo-Atherton High School. We visited with him at the 18 Media offices on El Camino.

InMenlo: What prompted your career in publishing?

Sloane: I actually started my first publication in second grade. It was called The Second Grade News and printed on a mimeograph machine. I had other kids selling  it for 5 cents, and I kept 3 cents. Some of the parents thought I was exploiting their kids!

I’ve just always loved publishing. When I was in junior high, I started reading Folio magazine. In high school, I started a satirical magazine modeled after the Harvard Lampoon.

I came West to attend college at Claremont McKenna because I hated the East. I started a cartoon strip for the college newspaper. Then I was asked to be opinion editor, then managing editor, and then publisher.

InMenlo: In your 20th anniversary column for Gentry, you write about the mixture of family and business, both of which have flourished here in Menlo Park. What do you think has changed the most in Menlo the last 20 years?

Sloane: We were looking to live in Palo Alto but felt that Menlo Park was a less political, cantankerous place to live. We built a home in Felton Gables. Who would have thought that 20 years later, Menlo Park is more political and divisive than Palo Alto?

Our downtown is filled with empty store fronts and much of El Camino remains unbuilt. The City government has failed to provide leadership.

It’s bad for business. More and more people tell me they don’t think of doing anything in Menlo Park — they go to Palo Alto or Redwood City. I wish we had a more vibrant, alive downtown.

InMenlo: Besides work and family, what sustains you?

Sloane: We’re a relatively traditional Jewish family. My faith and my interest in learning is an important part of my life

I’ve been studying a part of Judaism called Mussar, which are Torah-based exercises on ethics and morality. It opened up a whole world to me. The idea behind it is that if  you want to lead a moral, ethical life, you can’t just throw yourself out there, you have to re-up and practice.

Family remains important. My youngest left for college last year. When you have four kids, you get numerous phone calls every day, even when they no longer live with you.

InMenlo: You mentioned in the Gentry column that you’ve coached 31 youth sports teams. Was there a memorable team or memorable moment?

Sloane: I started coaching when they were young and did everything from t-ball to soccer to basketball. One of the reasons I wanted to be in local publishing was to be involved in my childrens’ lives.

The highlight was when my youngest son’s baseball team — really a band of misfits — somehow ended up winning the championship. Because no one expected it, including me, it was very heart warming. It was wonderful to see a team of little boys coming together and building real camaraderie.

InMenlo: What do you read for pleasure — magazines? novels? nonfiction? Can you give some examples?

Sloane: In print, the magazines I read include Esquire, which is my favorite, along with Men’s Journal and Science Illustrated. I’m also usually reading two books, both non-fiction. I don’t read fiction. One is to learn something — I just finished the The Biography of Thomas Jefferson and thought Unbroken was a great book.

I also read huge number of things online. There are about 10 things on my tool bar that I read every night.

InMenlo: What do you see ahead for publishing in the next 20 years?

Sloane: I see the complete demise of metropolitan newspapers in paper form, but continued success for newspapers on the local level. They fill a void.

I think magazines will continue to do well, especially  high-end magazines that provide a tactile experience. That “feel of reading” doesn’t transfer well to an iPad.

Sloane: Carpaccio is where we like to go. It opened just before Gentry, so we share a time line.

I found your Road Trip to Syria to be another ripple in the pond that I have been swimming in as of late. Freedom. What it means and why it has frightened me all my life (unbeknownst) to me. I love that you wrote so much from the heart on a matter that brings most conversations into a spiritual warzone undelineated by time & space. I appreciate the lack of gravel pounding which hopefully allows readers to consider the importance of supporting the nation of Israel which has been endlessly misunderstood & marginalized. I leafed through the rest of the magazine & found it to be well put together & visually lovely but your heartfelt piece packed the punch for me. Thank you….what a surprise to find wise whispers in the midst of competing shouts…(no stab at free market etal)…just refreshing.