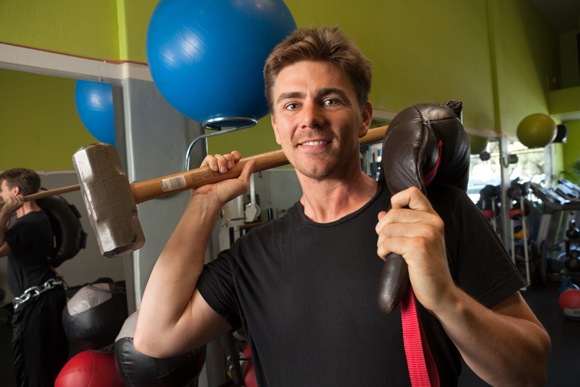 Colin Lewis opened Empowerment Fitness in Menlo Park last May. But he is no stranger to the area. His father lived in Menlo when he was growing up, and he’d spend weekends here. He also owned Body Matrix, which was located a stone’s throw from his current studio. We stopped at his new studio to talk about working out and how his approach may differ from other personal trainers in the area.

InMenlo: Were you always athletic? When and why did you decide to do this as a profession?

Colin: Yes, I’ve been athletic, but I’ve also always struggled with weight control. In middle school, I was really overweight. By the time I was 15, I weighed 265. Right now I’m at 220.

After college — I went to Oregon and played ice hockey on the club team — I did mixed martial arts. I’ve also done yoga and Pilates, and I snowboard. Guess my life has long been about working out in different ways.

InMenlo: What are some of  “fun and exciting” training techniques you employ?

Colin: We do non-traditional exercises and make the sessions interactive. For example, I’ll hold a person’s legs while they throw a ball. I want to be involved in the exercise and, at the same time, make sure people are doing it right.

We also talk about fun stuff like movies we’ve seen. I try to keep it engaging and entertaining.

InMenlo: You state on your website the importance of getting the right balance between factors of stress and recovery. Can you elaborate?

Colin: The way that I see it is that there are certain aspects of fitness that damage the body and others that help with recovery. The quick movements that come from doing plyometics, as example, put high stress on the body. The impact is right to your bones. It requires the most amount of recovery

I usually take the last 15 minutes or so of a session to focus on recovery, having the muscles relax and stretch out.

Colin: It’s hard to call it an age. For some people it’s 45 and others 65. Average is 55. There’s sometimes a difference between biological and chronological age.

Strength and power go down as you get older. So, the key is you don’t start with that stuff. That’s when injuries happen. Even though you know that’s the goal, you start with light stuff. And also look at life outside of the gym — eating, stress management and sleeping.

Cardio is the next thing — making sure the heart can respond and that you’re able to burn calories. Cardio is tougher than posture work but not as hard as strength. Lastly, you work on core strength and light weights. With a younger person, you might be able to start with the cardio.

InMenlo: What is your favorite aspect of your fitness routine? And the thing that you like least?

Colin: I dislike cardio the most — I’m a  runner/hiker/trail jogger. I think it’s boring. My mind starts wandering, although it’s easier to stay focused when I’m with a group. Probably I like high intensity stuff the most. Kick boxing, for example. I get a hard workout and don’t even realize I did it.

InMenlo: What do you do to relax, blow off steam?

Colin: Nature is a big thing — hiking and camping, all that kind of stuff. I also like getting massages. And meditating and reading.