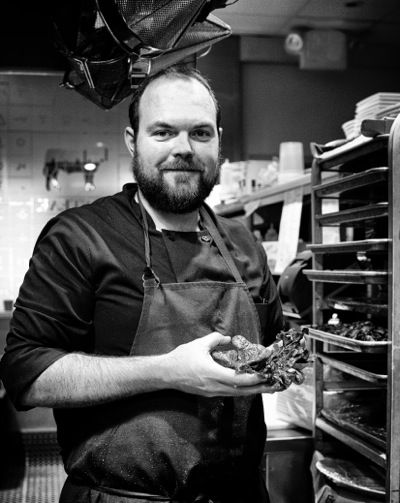 It’s probably a stretch to say that if John Gurnee’s mother hadn’t been an endurance rider, spending long hours training on horseback, he might not have become a chef. In high school, he often fended for himself at meal time, at times drawing inspiration from the big family dinners he’d enjoyed at his father’s family home in Atherton.

“I got my first job in a restaurant as a dishwasher/bus boy while I was in high school and got promoted into the kitchen,” he said, sitting in LB Steak in Menlo Park, where he assumed Chef de Cuisine duties last month. “Granted, it was short order cooking, but I learned a lot.”

John first came to the Bay Area to attend the California Culinary Academy in San Francisco before returning to the Sacramento area where he was associated with a number of successful restaurants before his most recent stint as Chef de Cuisine at Tyler Florence’s Wayfare Tavern in San Francisco.

“I set goals for myself,” he said. “One was to be an Executive Chef by the time I was 30, which I accomplished. I’ve been going full bore for a number of years. I’m happy here because it’s a little more low key — and the focus is on food and operations.”

At LB Steak, he says he’s been given a lot of leeway to change the menu to his style of cooking, which has a clear American bent. “I think of it as modern takes on American cookery,” he said. “Healthy food that’s on the forefront of  farm-to-table cooking. As example, I’m doing a grilled kale salad with sun chokes, potatoes and puffed grains dressed with Green Goddess dressing, which was invented at the Palace Hotel in San Francisco.”

We asked him who he’d most like to cook for, a question he pondered for some time before he answered, “Thomas Keller,” adding: “The other people who stand out are my grandparents. They passed away and didn’t get to see my success.”

LB Steak is offering both prix fixe and a la carte menu items on Thanksgiving Day from noon to 8:00 pm.