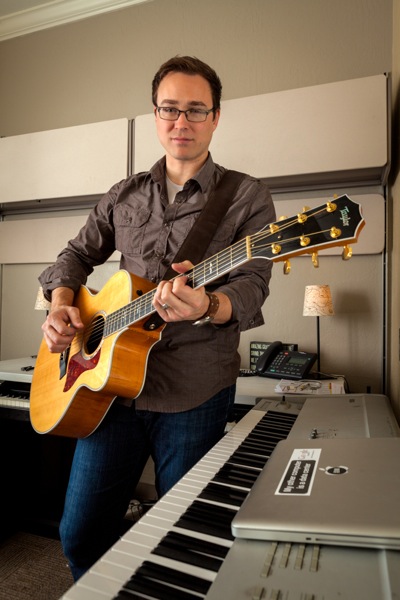 Eight thousand people will come to one of Menlo Park Presbyterian Church‘s 10 Christmas Eve services, so  Director of Worship Tim William has much to orchestrate. Along with other staff members, he’ll oversee the 100-person all volunteer choir and musicians. Everyone seems up to the challenge, bound by shared beliefs.

“The theme this year is Christmas Presence,” said Tim, who joined MPPC five years ago, initially to direct the music. His duties expanded to include worship last May. “It revolves around the idea of God being present with us and us being present with others.”

Campus Pastor Charley Scandlyn, who joined us at the interview, added: “Our philosophy of church, music, ministry and worship is centralized on the person of God. Christmas is a time of the year when our role is to create a sacred space, even for people who are not regularly part of a faith community.”

Tim grew up in Washington, the son of a music minister, and while directing church-based music was an early choice, it wasn’t what he first thought he wanted to do. “I grew up with Indie rock and was in a band when I was in high school and college. But I felt a shift in my junior year in college — what I call a moment of clarity about what God was calling me to do — and I’ve been doing church music ever since.”

Given the number of choir members and musicians as well as MPPC’s beautifully-decorated interior, one could view the church’s Christmas Eve worship as a spectacle, but Tim prefers to view it as an experience. “People want to connect at Christmas and we try to provide an experience that makes that possible.”

“There are traditional moments about the holidays that people expect, so there are things we do year in and year out. But we also look for ways to be creative — little surprise moments.”

There is one popular tradition that Tim and staff are bringing back this year. “We’ll end with a Bach piece, which will flow into Silent Night. The whole sanctuary becomes the choir and that’s what community is all about.”

Eight of MPPC’s 10 Christmas Eve services will be held at the main sanctuary (three of which are on 12/23),  and the other two are at the Cafe behind Ace Hardware. A complete schedule of services is available on the church website. The services at the main church are identical. Note: Both Tim and Charley said that the later evening services, which do not offer childcare, are somewhat less crowded.