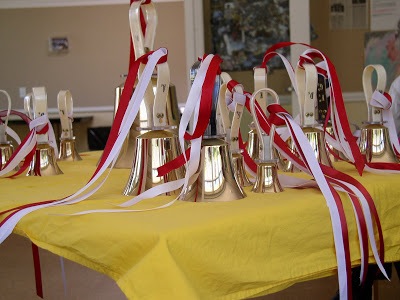 People hear the word “choir” and most often think of voices, but Trinity Church in Menlo Park has a choir of a different sort, a dozen or so people who are part of a handbell choir called Trinity Ringers. The group will be accompanying a string quartet and vocal choir at the 6:00 pm service this Christmas Eve.

According to Wikipedia, handbells were brought to the United States from England in the  early 20th century. Handbell choirs play recognizable music with melodies and harmony, arranged specifically for that instrument.

Trinity’s handbell choir is celebrating its 15th anniversary this year. It was started by parishioner Mary Pless, who had grown up in Texas, where handbell choirs are more common, as is true in other parts of the South. 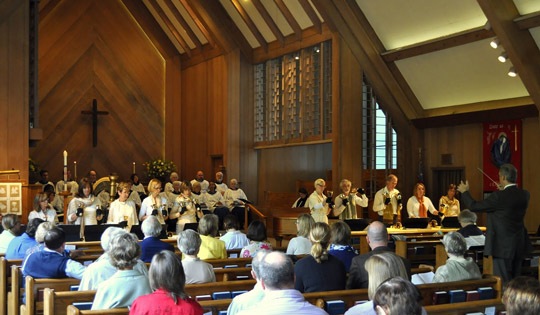 “As a child I’d played with my sister in a bell choir on an Air Force base in San Antonio,” said Mary. “I wanted to do something in her memory after she died of breast cancer in 1997, so I approached Trudy Minkler, Trinity’s music director at the time. We began in the Fall of 1998 with three octaves of bells. Today we have five octaves.”

The Trinity Ringers play once a month from September through June and make occasional appearances outside the church. “One fun thing we do is play the last Friday of December at Etz Chayim in Palo Alto,” Mary said. “One of our ringers is a member there. He’s a talented percussionist and musician, and it’s a nice tradition to play at his place of worship.”