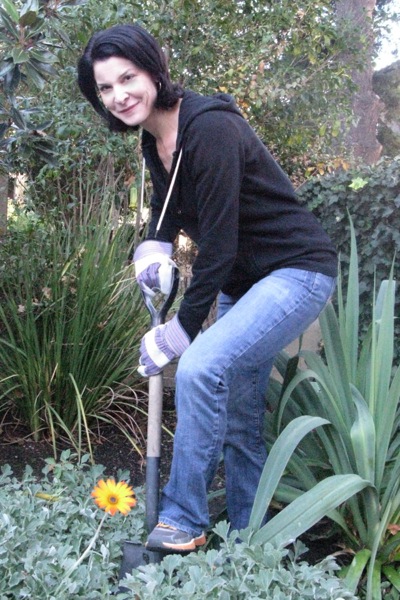 The two large hedges in Laura Hawkins’ backyard had been a source of annoyance for some time. “They made both the yard and the house so dark,” she said. “Finally, I pulled them out, but that left a big bare space.”

Rather than going out and buying new plants, Laura hatched the idea of using recycled plants, sourced via a message on her neighborhood Nextdoor. For the project, she enlisted the help of her friend, Ashlee Bentley, who, she said “knows a lot about plants and is also a photographer.”

The two women had clicked after meeting each other through Ashlee’s husband. “We liked going to estate sales and thrift stores,” said Laura. “I shelter dogs and so does Ashlee. We both like giving things a second chance.”

Laura grew up in Atherton and graduated from Menlo-Atherton High School. After school in the East, she returned to the Bay Area to work first in the TV and newspaper industry before opening the first doggy daycare in San Francisco. With two young children, she moved back to Menlo Park and is now a contract personal assistant. 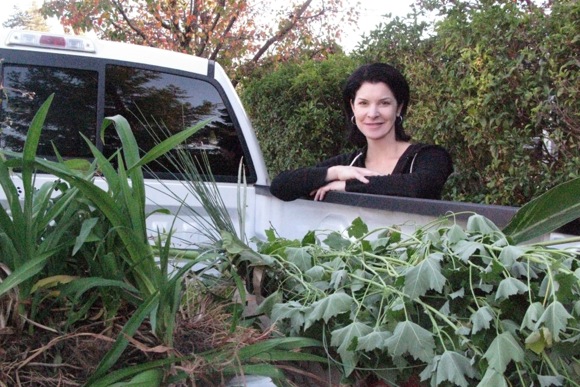 About the recycled landscape project, she said: “The idea was to find plants that people were going to throw away because they were re-landscaping.  Ashlee and I’d go in with shovels and dig out the plants, everything from little succulents to medium size plants. We got a couple dozen plants. They were easy to re-plant, too.

“We took Hydrangea that were frost bitten and looked dead. We trimmed them down and covered them. They’re now thriving.

“I anticipate doing more. People seem to like the idea of giving their unwanted plants a new home.”