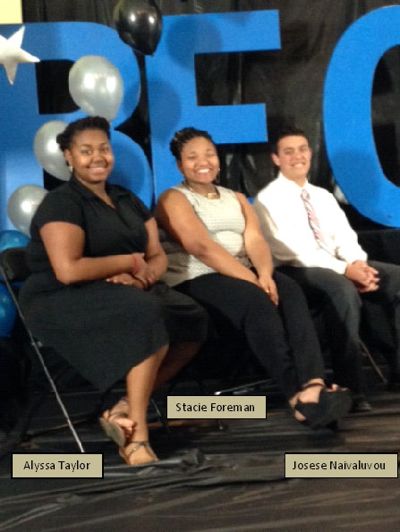 Seventeen-year-old Mid-Peninsula High School junior Stacie Foreman, who aspires to be an orthopedist, was named Boys and Girls Club of the Peninsula (BGCP) Youth of the Year on Monday night at the the McNeill Family Clubhouse in Menlo Park.

Two other Menlo Park teens were finalists: 17-year-old Alyssa Taylor, a junior at Mid-Peninsula High School who hopes to become a veterinarian and 16-year-old Josese Naivaluvou, an aspiring mechanical engineer who is a junior at M-A.

A committee of Carole McNeil, City of Menlo Park Mayor Ray Mueller, and Commander Dave Bertini of the Menlo Park Police Department were given the task of selecting the Youth of the Year.

The three finalists fulfilled the requirements of being a high school senior or junior on track to graduate from high school who is a positive role model and active in the Club. In addition, they’ve demonstrated their ability to overcome personal obstacles, showed empathy by helping others in their community, are a leader and independent thinker, and have plans to attend post-high school training or education.

The three candidates each participated in a 10-minute interview with the panel and gave a three-minute speech. The judges also reviewed the finalists’self-written biographies, their school transcripts, an essay in response to the question, “What is something that is important to you and makes a difference in your life?”, a recommendation letter from a BGCP staff members well as a letter from their school.

The Youth of the Year for the BGCP moves onto to represent BGCP in the Boys and Girls Clubs of America national competition in February.