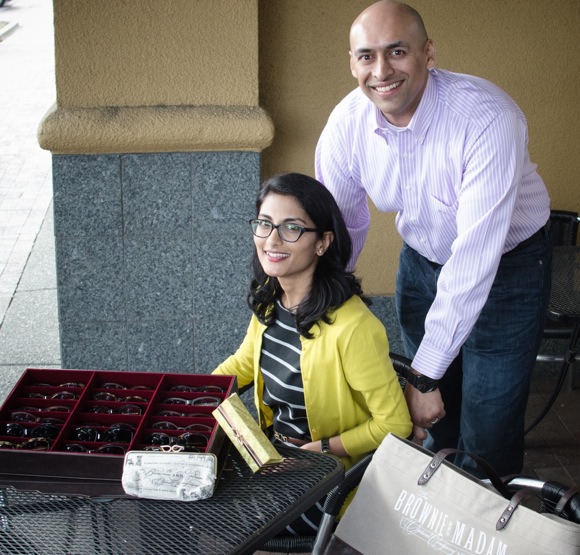 What’s Brownie and Madam and what has it to do with eye glasses? We admit the answer is so well described as part of a new eye glass company co-founded by Menlo Park residents Dr. Alpa Shroff and her husband Nik that we aren’t going to retell the story here. (But do recommend you find out!)

We talked with Alpa and Nik just weeks after launching. Alpa is an optometrist and Nik has an MBA from Stanford. They met at the University of Waterloo in Ontario.

Nik is Canadian; Alpa was born in India but spent her childhood in Botswana before her family immigrated to Canada. They now call Menlo Park their home, a place they chose because it’s “a family friendly community that we decided was a good place to raise our daughter, who was born in 2011,” says Alpa.

She recalls that glasses have been a part of her life since 6th grade when she got her first pair of prescription lenses. “I remember seeing the blackboard for the first time,” she says. “I was drawn to a career that could help people, but that I’d have some control over.”

Nik describes coming to the Biz School with an undergraduate engineering degree and a lot of “country” in him “Going to business school helped me grow up,” he says. “And somewhere along the way I realized I wanted to create something from scratch.” 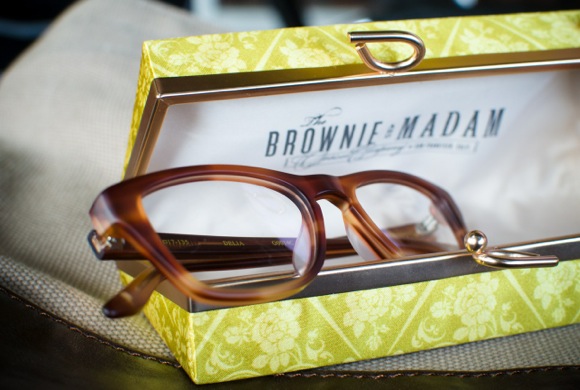 The story of “why eyeglasses,” is, as we’ve alluded, well documented on their website. Adds Nik: “We knew from the beginning that we wanted to create a direct sales company that had the ideals personified by Brownie Wise and Madam C.J. Walker.

“We want to build a group of independent sales representatives that truly enjoy helping people and offering a better product at a better price.”

The husband/wife team worked on their concept full time over a period of a year before launching. “The focus on women’s eyewear is one differentiator,” says Nik, ” but the big difference is that we manufacture everything ourselves. Most eyeglass companies outsource, but we both design and manufacture.”

“This is our baby,” says Alpa. “We have high expectations and standards. Getting that translated into the final product wasn’t always easy. We want the frames to be beautiful while also bing comfortable to wear.”

They’ve been pleasantly surprised at one aspect that early investors expressed skepticism about. “They weren’t sure that customers would embrace the convenience of a direct sale, of choosing their eye wear anywhere at their convenience rather than in a retail environment.”

If you find yourself in the market for eyeglasses and decide to give Brownie Madam a try, you’ll find a cameo of Alpa on the eyewear, a reminder that there are two real people behind the company, even if neither is named Brownie or Madam.