When writing her new book, Moments of Impact: How to Design Strategic Conversations That Accelerate Change

“The irony is that he’s exactly the kind of new leader that we talk about in the book,” said Lisa, who is co-author along with Chris Ertel. “At the first meeting of the Design Team I attended he started the meeting by saying, ‘Welcome designers.’ That put us in the state of mind ready to create things.”

According to Lisa, she’s putting on her “Terry Gross/Fresh Air hat” when she appears with Erik at Kepler’s on Wednesday, March 12 at 7:00 pm. “It’s a great opportunity to let Erik tell his story to the whole community,” she said. “His arrival at Hillview coincided with the opening of a beautiful, new campus. The school was in a good place with no urgent problems. 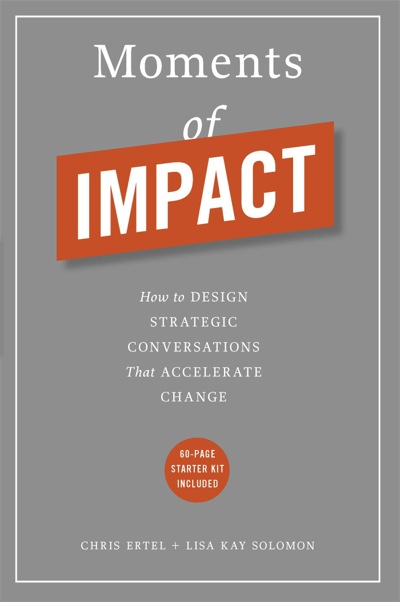 “So Erik asked the question: ‘How can we better serve our students.?’ And rather than trying to reinvent everything, he focused on three things.

“He was also willing to recognize the constraints of being a public school principal with its Board and teacher unions. But he wasn’t willing to be defined by that. Designers see constraints as opportunities.”

Lisa’s two children aren’t old enough to attend Hillview, but the local public school system was one of the main reasons she and her husband moved to Menlo Park from San Francisco after they became parents. “The schools and the number of pumpkins people had on their porches,” she laughed. “To me, that’s a real indicator of a sense of community.”

While Lisa’s professional focus is working with executive teams and the book is directed at business leaders, some of its principles can be applied to parenting. “In a Ted talk [viewable on her website], I bring up the notion of ground hog day conversations,” she said. “That is, having the same conversation over and over. As parents, we all can relate.

“But in our family we visually map our responsibilities, so it’s clear who is responsible for what. And we get out of the ground hog day conversational loop.”

Acknowledging that there is innovation in Silicon Valley, Lisa points out that innovation takes leadership. “These are leaders who are collaborative creators, leaders who don’t have all the answers.

“The book is very intentional about talking about how to have strategic conversations. At the back, there is a 60-day starter kit so that people can put the book’s principles into action. If you’re reading this book, you can do it!”

Photo of  Lisa Kay Solomon at Kepler’s by Irene Searles