It had an ominous name – the Silver Dragon VIII Emergency Exercise – but its purpose may keep local residents safer in the future. The drill, staged at Cafe Zoë in the Willows neighborhood of Menlo Park this morning, tested the ability of public agencies and volunteers to provide emergency assistance in the event of a major health emergency such as Pandemic Influenza, a food or water-borne illness, or the intentional release of a bio-agent.

The San Mateo County Health System partnered with local cities, law enforcement, fire departments, the American Red Cross and Community Emergency Response Teams (CERT) for mass-dispensing of medicine from the U.S. Centers for Disease Control and Prevention’s (CDC) Strategic National Stockpile (SNS).  To test door-to-door distribution as realistically as possible, CERT teams distributed educational information in re-usable, eco-friendly shopping bags in the Willows neighborhood as well as in East Palo Alto and at Menlo College, simulating medicine that could be delivered following a health-related emergency. Results from the exercise will be shared with other health agencies. 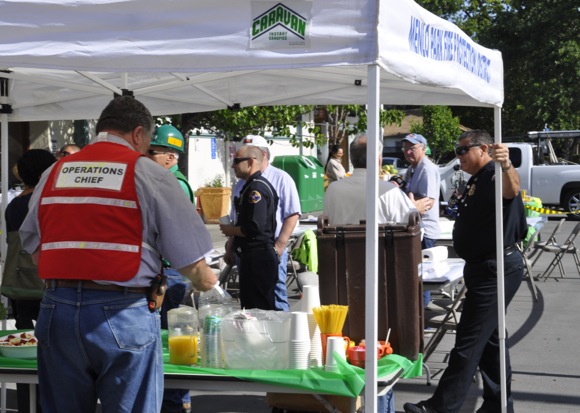 The purpose of the CERT program is to improve community preparedness in the event of a disaster. The goal of the program is to help the residents of Menlo Park Fire District be self-sufficient in a major disaster situation for at least 72 hours. CERT training teaches participants how to develop neighborhood teams that are cross-trained in basic emergency actions.